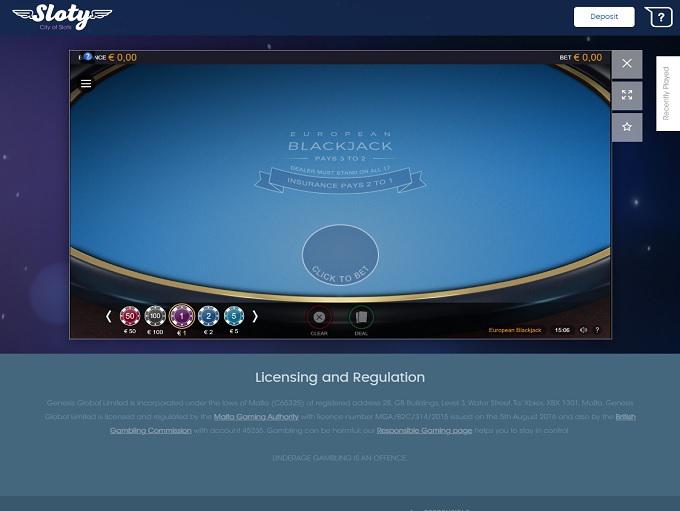 The name Sloty Casino obviously tells you a lot about what this site is focused on. They have been around since the middle of 2017, and they are owned and operated by Genesis Global, a very well-known company that needs no introduction. With a site that doesn't have the history of many of its competitors, many players will shy away. However, between the fact that it's operated by Genesis Global and the fact that it has licenses in both the United Kingdom and Malta, the two strictest and most respected jurisdictions in the industry as a whole, we think it's completely reasonable to trust them.

The main software used for this casino is powered by Microgaming Quickfire. This platform includes all of the most recent and most popular releases from Microgaming with several hundred titles available from that one provider alone. Along with that comes games from several third-party developers as well, and that includes big names like Rabcat, Quickspin, IGT (through their Wagerworks online subsidiary), Thunderkick and others. Added to that platform as well is the full suite of games from Net Entertainment.

One of the most important things about this platform, other than its huge selection of high-quality games, is that it's extremely flexible. You can play from it on desktop using any operating system that has a web browser, and that includes Windows and Mac in addition to Linux. Along similar lines, you'll have a ton of mobile options for both smartphones and tablets, and that's because it works on virtually all modern mobile operating systems as well. This selection includes Windows Phone, Android, iOS, Blackberry and other big names.

When your name is Sloty Casino, it's easy to see that you're all about some online slots. With so many different software companies contributing content here, it's also easy to see that there are a ton of opportunities to play high-end titles within this genre with a variety of themes, formats, features and play styles. They also include the two largest and most popular progressive jackpot games in the entire online casino industry with Mega Moolah and Mega Fortune from Microgaming and NetEnt, respectively. These two titles have battled over the record for the largest online progressive jackpot for quite a while.

Despite the name of the game itself being slot-centric, the table game selection is very solid with plenty of depth and breadth. Several styles of Baccarat and roulette start players off, and that's rounded out by craps and plenty of card-based games like casino poker. Blackjack and video poker tend to be where strategically minded players head, and there are over a dozen of each of these types of games available here. You can get payout rates of over 99.5 percent in some of these games if you play well, and they also have scratch cards for players who just want a few quick rounds of play with chances to win some solid prizes.

The selection of banking methods used at this casino center around credit cards and electronic means. Skrill, Neteller, Paysafecard, EcoPayz, GiroPay and Trustly cover the electronic side of things. They also have Maestro, MasterCard and Visa available as far as credit cards are concerned. You can use bank transfers for withdrawals as well.

Sloty Casino was only opened in 2017, which means it doesn't have as much of a history as a lot of the competition. That can make some players hesitant to play with them. While that's a reasonable stance to take, they are licensed by the United Kingdom and Malta, which means if anything shady happens on a withdrawal that isn't paid, you'll have arbitration processes available to you that can help to recover your funds. Additionally, they are operated by Genesis Global, a particularly reputable company, so your chances of having anything like that happen are slim to begin with.

Customer service is based around a 24/7 live chat primarily. You can also use telephone and email options, and this includes dedicated lines for players from the UK, Sweden and Germany.

With a huge selection of online slots and table games, Sloty Casino definitely has the game selection side of things covered. They also have plenty of reasons for you to be able to put faith in them despite the fact that they have only been around since 2017. For players who still aren't comfortable, there are plenty of great sites with similar software that we recommend that have been around for longer. Overall, they're still a good choice, and they will solidify their position as they get more time under their belt to build their own history.