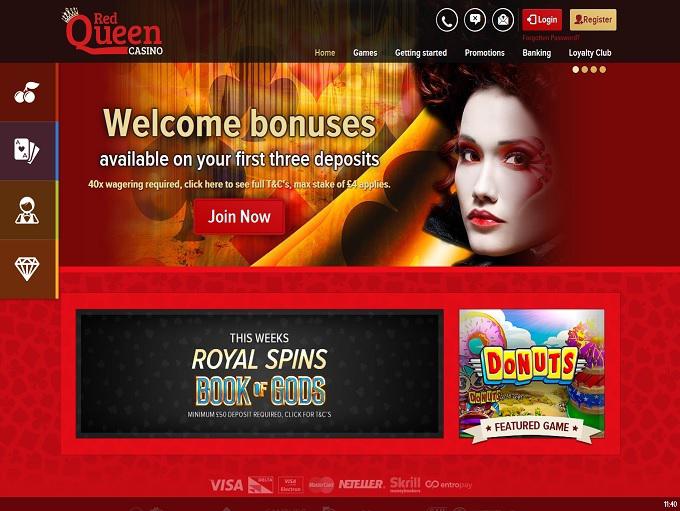 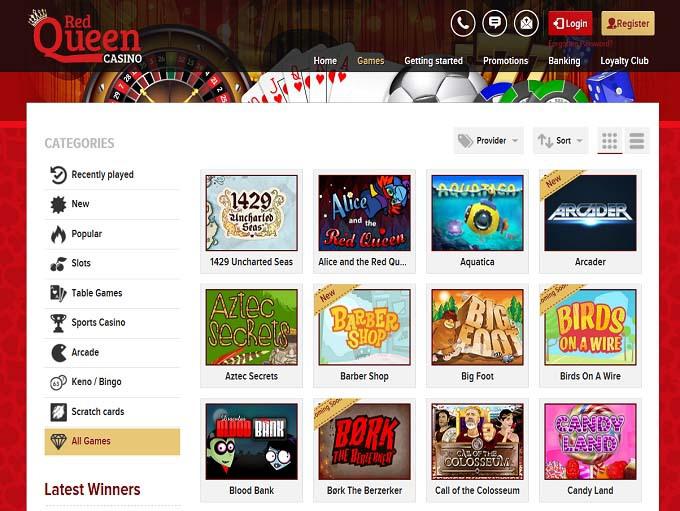 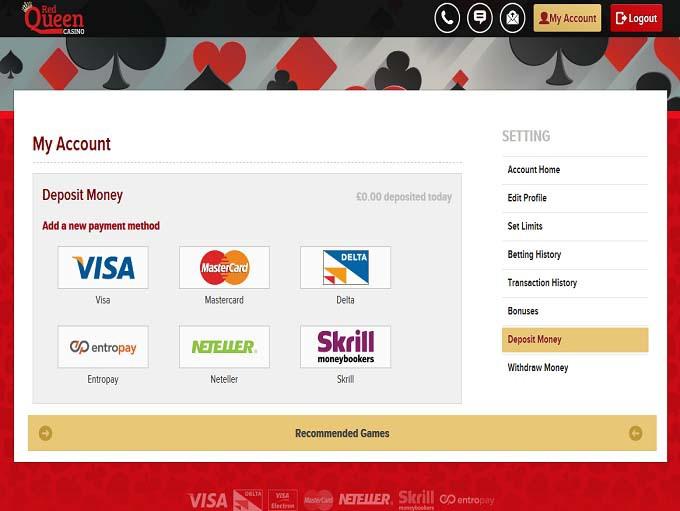 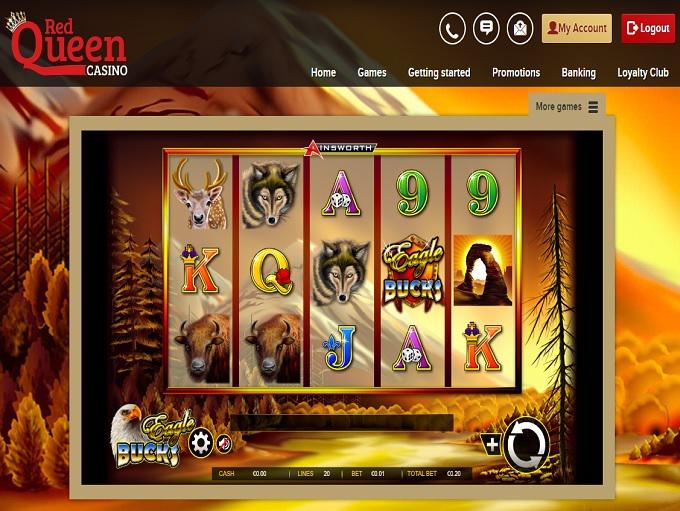 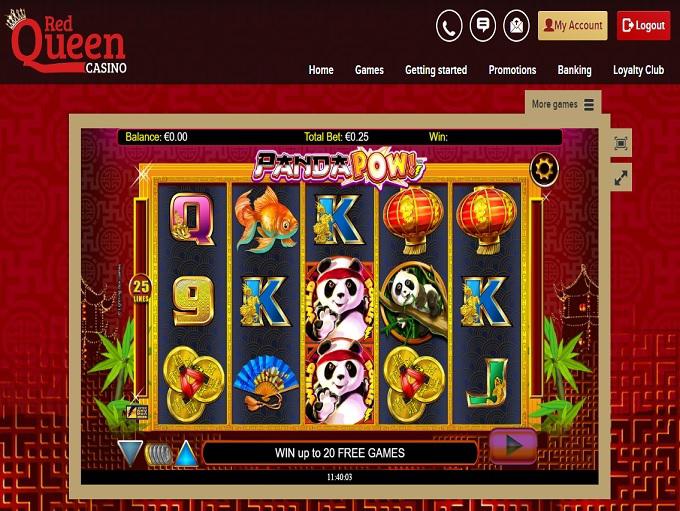 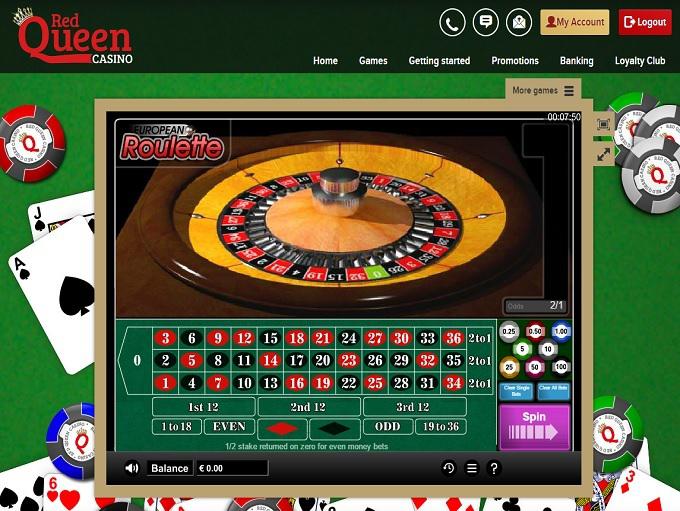 The name Red Queen Casino probably makes players think of the Alice in Wonderland stories, and that's similar to the type of weirdly royal theme that you'll find at this site. They have been running since first opening their doors in 2014, and they have a license in the United Kingdom, which is generally considered a top-level regulatory body from industry experts. They have a wide range of titles, good promotions and a solid reputation for taking care of their players.

An interesting mix of games from different providers can be found here. That list includes CryptoLogic, Foxium, NYX Interactive, Thunderkick, 1x2gaming and a variety of others. They definitely have quite a bit of breadth when it comes to giving players lots of different titles in different styles from different developers, and that makes them take on a sort of "one-stop shop" type of vibe for players who are looking for a variety of experiences.

Regarding the ways players have to connect and get in on the action, there are instant play and mobile options with no download required for each. Mobile players can connect from smartphones or tablets of a variety of screen sizes on operating systems like iOS, Android and Blackberry with no compatibility issues. Likewise, you can get started playing on computers that run Linux, Windows or Mac OS as long as you're connected to the Internet and have an updated web browser installed.

It's clear that they make it as easy as possible to get in on the action with a very flexible software client.

Hundreds of slots in total can be found at this casino. What's really cool is that getting so many games from so many different providers means that you get to see the visions of what the experience should be like from a lot of perspectives. That level of variety is one of the keys to why players feel like they have both breadth and depth when it comes to their game selection in this particular genre.

It's worth noting that there are a lot of themes, features and play styles (low-volatility through high-volatility, for example) that can be found here as well. Many types of players will be able to find several options that fit what they are looking for, so it's easy to see how they appeal to so many people.

Table games are a minority of the available titles, but a sufficient number of them can still be found here. The whole idea is to give players as much variety as they can handle, and you'll get that with roulette, Baccarat, craps, video poker, blackjack and a number of other options like keno and scratch cards that aren't strictly table games. It's a good mix with a lot to pick from no matter if these titles are your favorites or if you just use them as a break between slot sessions to mix things up a bit.

Red Queen has a good reputation for paying out when they're supposed to without unnecessary delays. Their banking method selection includes credit cards like Mastercard and Visa as well as electronic methods like Neteller and Skrill. Bank transfers can also be used.

It's worth noting that there's a withdrawal limit of 3,000 GBP per day, and that's something that high rollers in particular will want to take notice of before playing here. While it won't really affect the vast majority of players, it's still something to keep in mind.

The customer service options for this casino are wide open with email, live chat and telephone lines available. Both the telephone and live chat services will get you in contact with someone in real-time within moments, and that means that the email option is best for players who don't need a resolution right away to whatever it is that they have going on. With that having been said, we sent off an email to ask a few questions for this review, and we received a response within an hour, so it's not like you'll get inordinate delays with it either.

When you play with Red Queen Casino, you're getting a lot of games from a lot of providers on a flexible platform for both computer players and mobile. Their banking options are pretty wide open with a lot to choose from, and their history and licensing make it easy to have a serious level of peace of mind when playing there.

The only thing that could be seen as a negative issue that we encountered is the 3,000 GBP withdrawal limit, but since it's set up in a way that will only impact a very small percentage of players, we don't feel that it's a major problem at all.