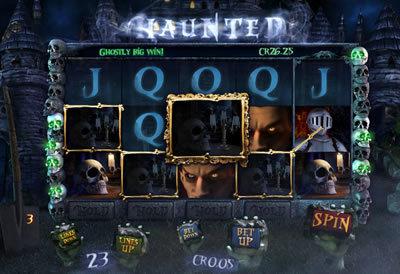 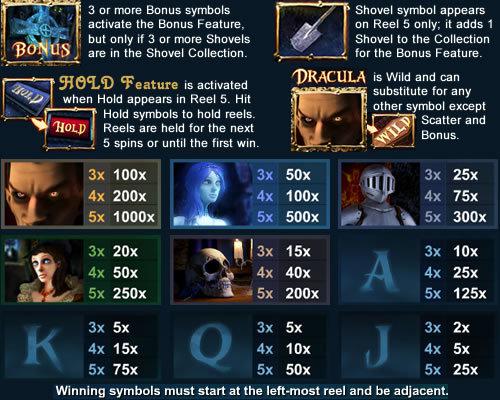 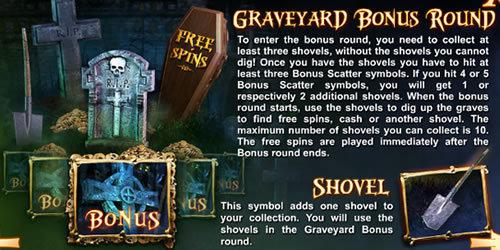 Haunted slots have five reels and 23 paylines, with wilds that transform into coffins, a hold feature, and a bonus round which awards extra credits, free spins, or both!

The Haunted slot game was released at Win A Day online casino, just in time for Halloween 2013, with a little animation of creepy creature symbols, as well as Dracula and his haunted castle.

Bets are adjustable through coin sizes ranging from $0.05 to $2.00 per line, and by selecting from one to twenty-three pay lines. Minimum and maximum wagers range between $1.15 and $46.00 per game when all lines are activated.

There are 13 symbols on the pay table (a coincidence, or not?), and each symbol will show some type of animation during game play.

Symbol wins start from the left-most reel to adjacent reels, with the exceptions of the Hold symbol and the Shovel symbol, which appear only on the fifth reel.

The most commonly know vampire to most humans, is Dracula; he's the wild symbol. Or in this game it's the symbol of his facial profile and glowing eyes:

There are actually only two scatter symbols, the “Hold” symbol and “Bonus” symbol. But if you count the Shovel symbol, there are three scatters. We will start with it first:

Is triggered when a “HOLD” symbol appears on Reel 5, at which time hold buttons are added below the game’s reels:

Is located at the left side of the game screen. When you first play the game there will be a glowing “0” on the spade part of the shovel (the Shovel Collection number):

Is triggered when three or more “Bonus” symbols appear, and three or more shovels have been collected into the Shovel Collection (the number “3” must be present on the game’s Shovel).

Play Haunted slots to find out how many graves you can dig up in it bonus round, and may Dracula be with you! 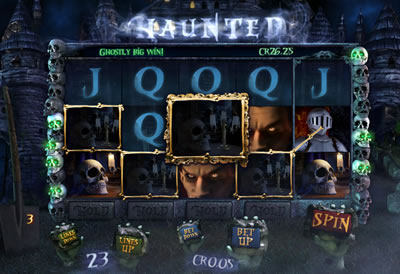