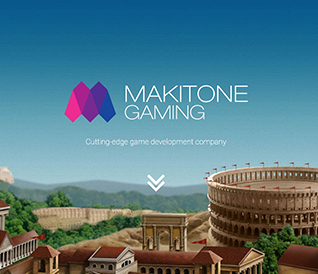 This is a relatively new player on the online casino software market, and chances are you haven’t heard of them before. They still have a long way to go, but for now, they hail from Estonia and the number of operators that feature Makitone Gaming titles is constantly on the rf you haven’t had the chance to try out some of their games, that’s probably going to happen any time soon.

Even though their portfolio is tiny when compared to some of the major players in the field, the quality of the games on offer is fully comparable to the most prominent games out there.

These guys aim at mobile oriented players first and foremost, so it goes without saying that their games are based on the latest technologies such as HTML5, and it all sums up a picture of a very experienced team that knows exactly what it’s doing.

The games cover a wide range of different platforms, including Android, iOS, Windows, and Blackberry devices. Of course, if you still prefer playing on your PC or laptop computer, there’s nothing to worry about.

The main focus here is on quality, and even though there isn’t a comprehensive gaming platform available in the product portfolio, all of the games can still be integrated into an existing online casino platform without any issues.

Even though the games are only a few, they seem to draw inspiration from the most popular themes, ranging from Ancient Rome to mobster movies, Norse tales and almost everything in between.

All the slots come with five reels and 25 paylines, and each title features its own set of peculiar symbols and bonus games. It goes without saying that the mechanics in these slots are quite similar, so it’s fair to say that they’d used the same “chassis” and built the handsome body on top of it

In practice, this means that all games provide a very similar experience when it comes to opportunities of winning. Some players might be turned off by such a lack of variety, especially the more experienced ones.

So, without further ado, let’s present you the games:

Caesar’s Triumph - Getting you back to the times of Ancient Rome.

Secrets Of A Geisha - A Zen-like gaming experience, inspired by Japan.

Vikings’ Victory - Of course, this one has a Viking-related theme.

The Gang Job - Step back to the age of mobsters.

Koi Garden - Are you into colorful fish? You are going to love this eye candy.

Even though these guys only have a couple of games under their belt, they obviously did their research well, as they seem to hit all the sweet spots with their games.

If they continue on such a glamorous path, the future will surely make stars out of them, but for now, let’s just enjoy their games, shall we?