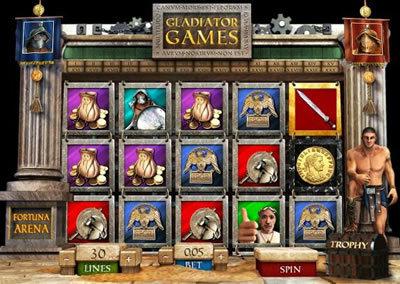 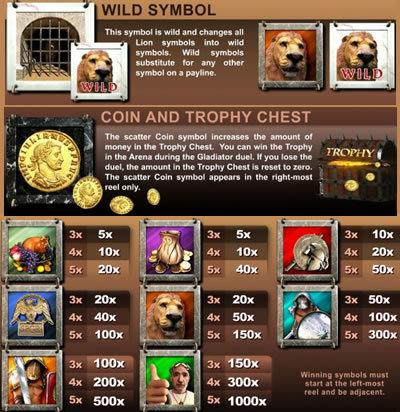 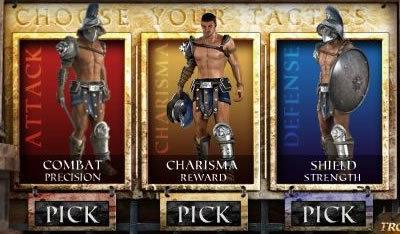 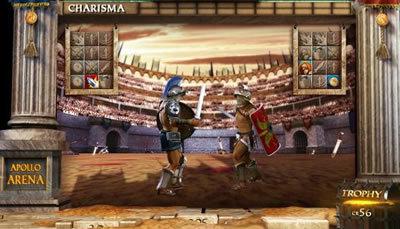 Gladiator Games slots have 5-reels and 30-paylines, with wilds, scatters, and a bonus feature that’s packed with gladiator fighting action!

Gladiator Games slot is so committed to its theme that even the loading screen is done in Roman numerals. And, for the record, so are its paylines.

Shows that a minimum of three symbols is required to return a payout in the gladiator styled slot, and play goes from left to right. You will find more information about the game’s pay table below.

Is the Gate symbol, which will turn all available Lion symbols into wilds:

Is the Coin symbol, which serves to increase the amount of money in your Trophy Chest (under the foot of the Gladiator):

During the course of the game, you’ll try to collect a Helmet, some Armor, a Sword, and a Shield in the form of singular symbols appearing on the rightmost reel.

The Gladiator Duel feature is triggered once you’ve collected all four of these symbols; and you’ll know when it happens, since the gladiator in the lower right-hand corner becomes fully clad in amour.

The Gladiator Duel seems more of a tactical game than a traditional online slot bonus feature. Once triggered, you’ll need to decide how you’d like your gladiator to fight:

Now that you’ve figured out how you are going to approach the duel, you need to figure out where you are going to fight it. The crafty hands at Slotland software have chose three different arenas-all with the same shape and surfacing, but each with its own audience personality.

The arena is determined by where you are when you triggered the feature (check the lower left-hand corner of the game). Every time you win an arena, you’ll proceed to the next one.

The pay table also shows the specifics of the fight: how to determine who is attacking or defending and which maneuver type is available to you. Don’t worry; it’s far less complicated than it sounds. All you need to do is tell it when to fight and the game figures out the rest.

Some of the noteworthy features of this Slotland-powered game are the auto-play and the expanded view format. The auto-play is an easy two-click set-up that allows you to play up to 100 games without touching an additional button. You can customize it to forego the winning sequences in order to speed up play.

The expanded view allow the game to grow to fit your entire screen; while this may seem unremarkable, what’s worth stating is the fact that the quality of the graphics are in no way degraded, making it a much better in-your-face experience. The Gladiator Games slot game is played specifically at WinADay online casino.

We’re not sure what ruling Caesar would have given the Gladiator Games slot game, but we give it a big thumbs up! 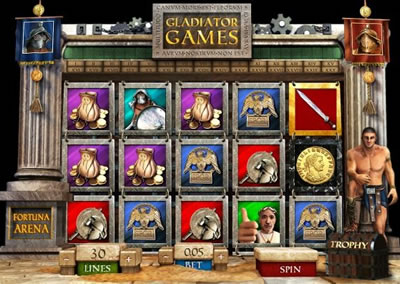