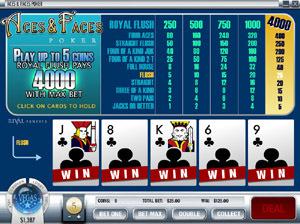 Aces and Faces is a poker game similar to jacks or better. Unlike Jacks or Better, payouts on quad aces and quad face cards are a lot higher.

Four aces ranks right under a royal flush in this game, you can win up to 400 credits betting 5 coins. Coins span from 5 cents to 5 dollars, making the total you can possibly play a hand $25.

Royal flushes here pay 4000! That makes Aces and Faces have a possible $20,000 up for grabs when betting the max.

The computer automatically points out any pairs you may have and picks them, if you don't like the computers choice and would rather opt for a flush draw or another hand you can unclick the card and pick which ever you want.

If you win you have the chance to double your winnings, this is incredibly hard though. Five cards are shown, only one of which is face up.

You are then to pick the card you think matches it, but lots of the time there is no matching card, so it's a complete gamble.

Aces and Faces is a fun game, just make sure to keep your winnings and not get greedy and blow them on the double option!