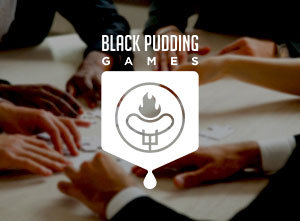 With a rapid expansion of the online gaming industry, it doesn’t come as a surprise that the number of new studios is growing at the speed of light. They are all filled with creative ideas, new approaches, and they push really hard to present their products to an as wider range of clients as possible.

Black Pudding Games is one of them, but what makes this brand different from so many others? Is it just the humorous name or something deeper than that?

What this forward-thinking creative gang…

…particularly points out is that being part of the gaming industry is not just thinking different, it’s about DOING different. Instead of filling their “about us” with well-worn tropes, they let their games speak on behalf of them.

So, let’s take a closer look and see whether it’s true that they are “not just another bloody sausage factory”.

Choosing to name a content development studio by a distinct regional type of blood sausage originating in the UK and Ireland is already one step towards showing that this team thinks outside the box.

…by a trio of like-minded mavericks, the inventive gang is far more than just being ‘disruptive’ and driven by a ‘passion for gaming’.

This crew of producers, with a combined experience of over 30 years in the casino gaming and entertainment industry, claims that they are “just curious”, in both senses of the word. That’s what motivates them to create different games and build their reputation of purveyors of playful ideas for the casino curious.

Not being afraid of trying new things…

…their main ambition is creating tomorrow’s new releases. Combining some common elements with innovative details, they hope to bring something considerably different from what players are used to. As they wittily point out- novel gaming is in the blood.

Among the first giants to recognize that this team is not one of those “all sizzle and no sausage” is the 1x2 Network. Two networks tied the knot in January 2020.

Thanks to this strategic alignment…

…the studio to deliver the content through 1x2’s aggregation platforms, 3PI and RGS. Moreover, this single integration enables operators to differentiate their products from the rival ones, giving them a unique opportunity to position well on the market.

Both sides saw the deal as mutually beneficial…

…projecting it to bring an even wider spectrum of new players and increased financial profits. BPG’s director referred to it as “instrumental” in the studio’s future.

Among the numerous brands which already operate under the Network’s gigantic umbrella are two proprietary studios- 1x2gaming and Iron Dog Studio, as well as developers such as Leap Gaming, Habanero, PGSoft, Playson, GameArt, Oryx and Gamomat.

All of these companies…

…are connected via the 3rd party interface (3PI). The massive Network itself has been present since 2002, which places them among the oldest brands offering online entertainment. The group is at the forefront of HTML5 development with a varied portfolio of sports games, table games, and slots.

One of the best ways to announce the presence in this highly competitive industry is to attend one of the busiest events. That’s right, it’s ICE London 2020 we are aiming at, and this curious gang didn’t miss the chance to showcase its noteworthy portfolio.

In the light of milestone partnership…

…the young company eagerly shared plenty of useful information with the interested parties about their current catalog, and ideas and plans for the future, paving the way for some new collaborations in the upcoming period.

A globally popular event such as is the ICE London is a perfect opportunity for up and coming brands to exhibit their products to well-respected gaming conglomerates. With over 150 countries represented on the show floor and over 600 of the most forward-thinking providers in gaming, this exhibition offers an unrivaled and global platform to find new business and partnership opportunities.

What Can We Expect from Their Games?

Though at the time being, there aren’t dozens of releases crowding their portfolio, it’s more than enough to indicate in which direction the studio plans to head.

Covering some of the most wanted genres…

…they crafted mobile-friendly gaming treats, which are filled with inventive features and incredible winning potential. Managing to create a perfect balance between the level of action and those dynamic options, they wrapped each game up in a captivating story, which brings a completely new perspective of gaming.

As announced, the productive team plans to “cook up” slots, instant wins, and table games, which means new content should be expected on a regular basis.

If things are to assume…

…based on their current products, they will keep on delivering inventive and rewarding releases, confirming that they are undoubtedly courageous enough to take a different path and explore the unknown. All that for the sake of delivering an enhanced player experience.

DOING Different? They Really Mean it!

Now, let’s take a closer look at the titles from their collection, which most certainly aren’t something one gets to see in every online casino.

One of the games, Aeterna…

…represents the world’s first Orbital Reactor™ game. Striving to reimagine the traditional format, they equipped it with versatile actionable details such as cascading mechanism, Multiplier Meter, and fantastic winning potential.

The other, dubbed Bun In the Oven is freshly baked Super Selector™ Scratchcard also sweetened up with the most delicious features. While creating a perfect bake by turning out three matching buns behind the steamed-up door of Pat’s oven, one has a unique chance to scoop 1,000x the total bet.

Judging by the third release from their catalog…

…it’s not just their name featuring something black. Taking a darkly humorous theme, the studio designed Slice & Dice™. Taking the very core of ‘Match 3’ online scratchcard formats, they wrapped it up in a story where one gets to be a “scratchcard surgeon” who cures the patients from a dice-related condition of Die-abetes.