Game of Gladiators, Victorious Slot by Play’n GO Takes You to the Most Glorious Battles Ever 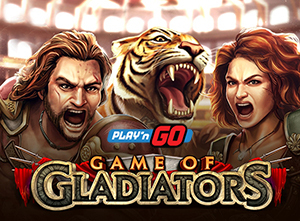 Brought to us by one of the most prolific brands in the industry, Play’n GO, here comes one of the most adventurous combats of all times. The 5-reel video slot Game of Gladiators brings plenty of glory with 20 potential winning ways. In addition to this…

…the release is equipped with several mystery features to add some dynamics to it. Do you think you are courageous enough to stand right next to the most honorable warriors? If the answer is positive, wait no more, head on bravely!

Aim to turn those who play be the last Gladiators standing in the Great Arena, the overall design represents a visual spectacle, just like the one seen in Phoenix Reborn. The release is masterfully rendered to look artistic. Moreover…

…the symbols give this game a unique atmosphere, fueling it with authentic details and aesthetics. With 20 betting lines, it takes 3,4 or 5 icons to pick some standard prizes in the base game. The studio, which expanded its presence to the Philippines seems to be skillful and knowledgeable in bringing a unique atmosphere as they did in Golden Colts.

The wild tiger can any other symbol, excluding scatters and boost chances to create winning combinations. Continuing with options implemented to raise the action level (like they did in Mahjong 88), the game has several Primus Attack special features which additionally trigger more options. Some are randomly activated before a reel result while the others are after.

Are You Ready to Enter the Arena?

This main feature appears when 3 scatters land on reels 1, 3 or 5. Once activated, the player gets to select one of two gladiators’ symbols, Amazonia or Spartacus, to be their champion and turn it into the Scatter for the duration of the feature. The list seems to be endless…

…as there are extra spins and many other options as well, but let us not spoil the impression by revealing too much about this Play’n GO release. After all, a bit of mystery and unpredictability will make you an even braver warrior, right?