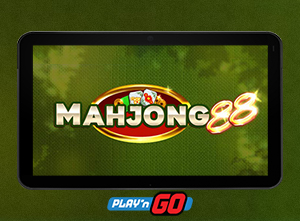 The latest video slot from Play'n GO is an interesting and fun departure from their usual fare. In fact, Mahjong 88 boasts a first for the company with its 8x8 grid format. The slot is based on the ancient tile game of the same name, but it breathes new life into an old pastime.

Along with introducing a brand-new 8x8 reel format, there are also a few other surprises that the company has in store for players.

The first is the unique reel animations. Traditionally, slot symbols will cascade onto the reels after each spin. In keeping with the theme of mahjong, the symbols for each spin are instead revealed from underneath the grid to mimic the removal of matched tiles.

Another exciting feature that sets this online slot apart from so many other games is the wilds setup. Classic mahjong has four special sets of tiles that correspond to the seasons, and in Mahjong 88, each of these seasonal tiles is a wild with a special function.

As players advance in the game, the season will change, and this means that the wild will change as well. Spring tiles will randomly appear, and summer tiles will appear and destroy adjacent tiles. Autumn wilds will fall like leaves to randomly destroy tiles on the grid, and winter wilds are sticky and will remain in place even after they trigger a winning combination.

As if this game needed any more excitement, the Play'n GO design team decided to pack in even more bonuses.

During a round, players can trigger the Fortune Frog by racking up big combinations. Each winning cluster of four or more tiles fills the meter, and 33 symbols is enough to trigger the bonus round.

There are four possible Fortune Frog bonuses that may be randomly chosen, but all of them involve changing tiles on the grid to create huge matches for even bigger payouts.

Players can also accumulate a season bonus. Every time they win, a small percentage of that win charges the seasonal bonus counter. When the season changes, the counter resets and players are awarded this free bonus.

Play'n GO is known for its fun and unique slots, and Mahjong 88 is a great example of why players love their games so much.