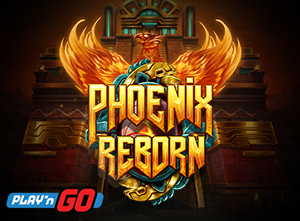 Leading online casino games developer Play'n GO has just launched the newest addition to their extensive portfolio of online slots. The game is called Phoenix Reborn, and it captures all of the mystique and allure of the ancient Aztec civilizations.

A Treat For the Senses

Play'n GO is known for producing video slots that feature top-quality graphics and animations, and Phoenix Reborn is no exception to this. The animations are smooth and appealing, and all of the foreground and background images are stunningly lifelike.

The game also features a thrilling soundtrack that can keep players alert and excited for their next big win.

Play'n GO game designers commented that they wanted to use this slot as an opportunity to "deliver a visual spectacle" that players will enjoy, and it certainly looks as though they have done just that.

Adding to amazing graphics and enticing music, Phoenix Reborn is a five-reel, six-row slot with 40 paylines and an assortment of bonus features that players love.

One of the most prominent features is the expanding wild. The titular fiery phoenix serves as the wild for this game, and it will expand to cover an entire reel when it lands on the screen. As with most wild symbols, the phoenix can substitute for everything except scatters.

In addition to acting as the expanding wild, it also plays an important role in the Rise of the Phoenix minigame. This free spin bonus game is triggered by the imposing Aztec sun scatter symbol, and players can accumulate up to 20 free spins depending on how many suns initially appear on the reels. During these free spins, more spins can be accrued if additional scatter symbols land on a payline, and the phoenix wild will always show up on at least one reel.

The game also has stacked symbols that correspond to the biggest payouts. These symbols are the fearsome Aztec warriors and the beautiful Aztec princesses. Because they fill the reels when they appear, it becomes much easier for players to hit multiple wins across paylines.

Play'n GO is a Swedish games development firm that was established in 2005. Their primary focus is delivering memorable mobile slots, and they have curated an extensive portfolio of award-winning games since their inception.