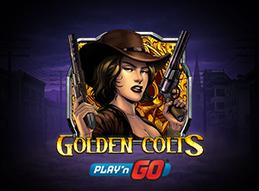 Online gaming company Play'n GO has announced that it will be kicking off spring with a 5-reel, 40-line slot called Golden Colts.

Golden Colts is not your average Wild West slot title. It does have all of the staples, including a sheriff and a gang of bandits, but it also has surprises that will keep players on the edge of their seats.

In an unexpected twist, players learn that the sheriff is actually undead, and he's using the titular golden guns to protect his town from the notorious Ace-High gang.

The game has 40 fixed paylines, and players must match 3-5 symbols on those lines for a win. The bull symbol acts as a wild and will substitute for anything except the Golden Colts scatter symbol.

In addition to a compelling theme, there are plenty of ways to win, including scatters, free spins, stacked wilds and mega symbols.

The Golden Colts Bonus Game is the star of this slot. When players land the Golden Colt scatter symbol on reels one, three and five, one of seven possible bonus games will be fired from the gun to activate it on the reels.

If players land the Poker Play or Furies games, one free spin is awarded. For Poker Play, one 2x2 gambler symbol appears, and a respin is earned if another gambler shows up on the reels. Gamblers also act as sticky wilds. In the Furies game, two 2x2 Lady Gunslingers are placed, and they are sticky until a winning combination is struck.

Finally, the Most Wanted bonus allows players to choose from 20 wanted posters to win either a cash prize or a chance at another minigame.