U.S. vs. European Roulette: What You Need to Know 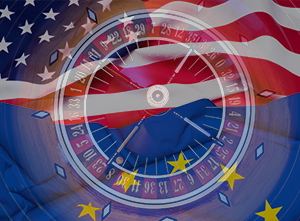 The European and American way of playing the game are totally different – as are your chances of winning.

European rules are considered more favorable to the player and your chances of winning are better, but if you educate yourself on the rules, both styles of play can be financially rewarding.

Here’s what you need to know the next time you play U.S. or European rule roulette.

Keep this in mind: In Atlantic City, all even money bets (red, black, odd, even, 1-18, 19-36) follow a variation of the European imprisonment rule.

There are four rule variations.

Single Zero “European Rules” in U.S. Casinos: Some United States casinos offer single zero roulette wheels that offer halfback or even money bets if the ball lands on zero, thus lowering the house edge on bets to 1/37 or 2.7 percent.

They include in Las Vegas: The Tropicana, The Monte Carlo, The Stratosphere, The Mandalay Bay, The Aladdin, The Luxor and Nevada Palace.

Also the Grand Tunica in Tunica, Miss. Most of the single wheels are in high-stakes playing areas and have minimum bets of $100 or more.

These bonuses allow you to play roulette to complete the wagering requirements.