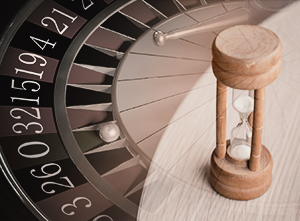 Roulette, a French word meaning "small wheel", is the oldest casino game still in existence. In some places, it is known as the "King of Casino Games." Although the game of roulette as we know it first emerged in the late 17th or early 18th century in European casinos, there are many stories and legends relating to its origins.

The most enduring legend, though, is that French mathematician Blaise Pascal invented the game as a result of his attempts to build a perpetual motion machine around 1657. At that time in England, there had been a game called "roly-poly" which featured a spinning ball and horizontal wheel that is seen as a prelude to modern roulette. When that was banned in 1740, Beau Nash who was the Master of Ceremonies in Bath England created a game called "EO" or even-odd. This game was easier to play than "roly-poly" but was banned in 1745.

In 1796 the first modern roulette table appeared in Paris casinos. In 1842 Francois and Louis Blanc added the "0" to the roulette wheel to increase house odds. There is a legend surrounding the addition of the "0" to the roulette table. The legend is that Francois Blanc made a pact with the devil to learn the secrets of roulette. It is based on the fact that when the numbers of the wheel are added up the resulting total comes to "666" which is believed to be the mark of the devil.

When gambling was banned in France the Blancs moved to Germany and set up a gambling house there. Gambling was eventually outlawed in Germany as well but Charles III, the Prince of Monaco who was looking for a way to relieve the financial problems his region was experiencing invited Louis Blanc (his brother had died by this time) to his country to set up Monaco's first casino.

The casino was an instant hit and was seen as a glamorous and elegant game that was not only easy to play but thrilling as well. It is still highly regarded in the country's magnificent and plush casinos. The game eventually made its way to the U.S. in the early 1800s first appearing in New Orleans.

The roulette wheel consists of thirty-six compartments number from 1 to 36. They are in alternating red and black colors. A 37th compartment is painted green and has the number 0 on European-style wheels or 00 on American-style wheels. The game is played with players placing chips on the roulette table on any number, group, or classification they hope will win.

The dealer spins the wheel in a counter-clockwise direction, then drops in a small ivory or plastic ball in the wheel's backtrack in the opposite direction. Players can still place bets while the wheel is in motion. When the wheel drops off the backtrack the ball will fall into one of the numbered partitions on the wheel. The dealer calls out the number and color then collects all losing bets and pays off the winners.

These bonuses allow you to play roulette to complete the wagering requirements.