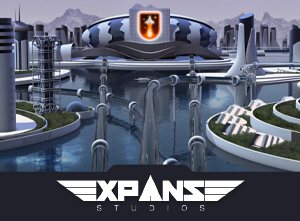 Announcing its presence in 2019, Expanse Studios entered the industry with a clear goal- to show things from a completely different perspective. Being part of the busy entertainment universe means constant striving for changes, and seeking new ways to keep players interested- and that’s what this provider is eager to offer.

Does Expanse have what it takes to conquer international markets?

If things are to judge by the colorful spectrum of topics of their games, they do have solid foundations to become a well-respected brand. Plus, the name of the company itself hints that these creatives are here to prove that boundaries don’t exist.

Founded in 2019, Expanse Studios joined the thriving gaming industry bringing a wealth of experience and tons of new ideas. Gathering a group of forward-thinking enthusiasts, but at the same time veterans, the company wants to bring a new approach to game creation.

So, what are they mainly focused on?

What matters to them the most is to satisfy various players’ preferences, and they accept nothing less but the best. The three areas where they strive to offer perfection are the following:

…there’s only expanse, there are no limits, except for the universe. Though it may seem like the same intro many new brands make when entering the entertainment sphere, still, it’s the unique energy they possess, thanks to which they quickly get noticed.

Agreement with One of the Leading Bookmakers

One of the best proofs that a brand managed to catch attention relatively short after announcing its presence are strategic partnerships, and this studio already entered a significant one.

…Expanse Studios penned a commercial deal with Meridianbet, one of the leading brands in Serbia and many other markets. Thanks to this alignment, the supplier’s collection of slots and other casino games will significantly enrich Meridianbet’s offering.

Both sides labeled the collaboration as a fruitful one, hoping to achieve plenty of success in the upcoming period. As a small reminder, the operator’s portfolio gathers more than 35 different brands under its umbrella, displaying not only casino games such as digital one armed-bandits, video poker, and table games, but a generous selection of sports as well.

Fantasma Games, Golden Rock Studios, Playtech, Habanero Systems, Crazy Tooth Studio are just some of the producers found in its lobby. The cooperation with the community of passionate enthusiasts from Expanse Studios adds more value and diversification to its already impressive selection.

As for the studio’s license…

…we cannot state for sure which jurisdiction gave its approval for operating. However, the official address of the company is in Malta, one of the most stringent iGaming authorities.

Realizing that slots fans make up a majority of all gambling audience, it’s only natural that content providers will focus on this category primarily, and this studio is no exception to the rule.

The first thing to notice…

…is immense diversity in the selection of topics. From all-time favorite fruities to mystical creatures, and animal-themed releases as well as treasure-hunting and heist-inspired titles, Expanse Studios made sure to cover as many different stories as possible.

While themes are extremely versatile, their products have certain elements in common. To start with, visuals are truly excellent, as it is more than clear that they are detail-oriented. Each of the characters and symbols from their games is carefully illustrated and also neatly painted.

Also, they are all feature-packed…

…and additionally enhanced with fantastic animation. On top of it all- great soundtrack, which, like the rest of the elements, perfectly fits the entire story. It’s the final touch thanks to which all of the releases from their creative workshop are well-rounded products.

Here are some of the slots from their collection: Maya’s Treasure, Piggy’s Party, 777 Sticky, Casino Heist.

Is there anything else aside from one-armed bandits?

Wanting to cover other profiles of punters as well, the team made sure to add other categories of games as well. But, instead of presenting something seen so many times, they took a different approach, just like they promised and reinvented some evergreens.

For those who prefer classics…

In addition to this, punters can find some unusual formats which encompass multiple different categories, making them suitable for various types of gamers.

…Gem Miner combines both slots and scratchcards, putting players before quite an interesting task where they are supposed to collect matching symbols of crystals and grab some prizes.

Then, there's Crazy Horses, which resembles a lot a genuine horse race, but it comes in quite a comic wrap-up. Moreover, there’s a mission to find a hidden object structured in 4 levels and 15 fields- depicted in Evoji.

If the name sounds familiar…

…the feeling is right, as this studio is not the first one who found inspiration in Emojis. NetEnt’s got Emojiplanet in its catalog, Endorphina bolsters Slotomoji, while IWG went live with new kind of experience in their Emoji Money release.

All in all, in terms of topics, the producer undoubtedly stands true to its name, as the expanse of themes found in their catalog can satisfy various demands.

Do they use any innovative features?

Like the freedom they have when it comes to the selection of topics to utilize in their games, the same willingness to deliver plenty of action is seen in their features.

The classic ones such as multipliers, extra spins, Wilds and Scatters are present, but the list doesn’t end with them. One of their releases is equipped with tumbling reels, which can award multiple consecutive wins both in the base and additional game.

Then, there are sticky wilds, special features which trigger re-spins, mystery and wheel bonuses, gamble feature, and many more.