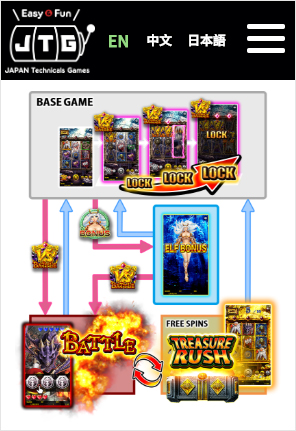 Japan Technical Games has been operating since 2018. They are based in Hong Kong, though the company itself seems to be mostly Japanese. This is evident from their production of pachislots, which are something of a mix between slots, arcade games, and local legislation. Currently, the company is solely concentrated in bringing more of these games to the markets. They have partnered up with Golden Hero and Oryx Gaming to do so.

The games themselves tend to follow the same format. This doesn’t mean that they are one-shot slots, with novelty the only reason to play. It might very well be that these games will become your new favourites, as the format they use is a very interesting one. Try in demo mode before you put your money in!

The typical pachislot comes with a three times three grid, making it feel quite like a classic slot. The games are colourful, with a lot of resources invested in perfecting the graphics(you can forget about playing card ranks here!). This might not be what a traditional pachislot looks like, but neither do modern slots look the same as the terminals and one-handed bandits of yesteryear.

You can read more about online pachislots in our dedicated article. Suffice to say, Japan Technical Games is the first company ever to bring these games to online audiences. They offer an experience that looks and feels familiar at first but quickly become something else entirely.

The bet level in these games is generally quite low, and so are the basic wins. In a way, pachislots take a lot of influence from classic slot games when it comes to gameplay mechanics, but the way the paytables are built favours the special features. That is to say, if you want to win big you have to aim for the bonus rounds. It is then no surprise that these games come with a high variance.

...but, to offset the long wait times and frustration of not hitting any winning combinations for a dozen spins, the reels tend to be full of action. Gameplay options like speeding up the reels further reinforce this. Of course, there’s good music and animations that add in their own bit of entertainment to the games.

Special Features that build up into massive jackpots

The core mechanic that makes these games popular in Japan and now online is the special features. What you are trying to hit are the respins. This sounds a bit simple, and you might think it’s just an extra spin, but that is not the case. Repetition is the case, which means that one respins leads to another, which leads to another, which leads to further features that ultimately build up to the kind of wins that you often only find in jackpots. Check out the games below!