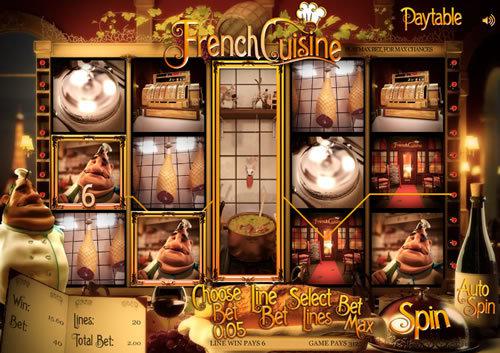 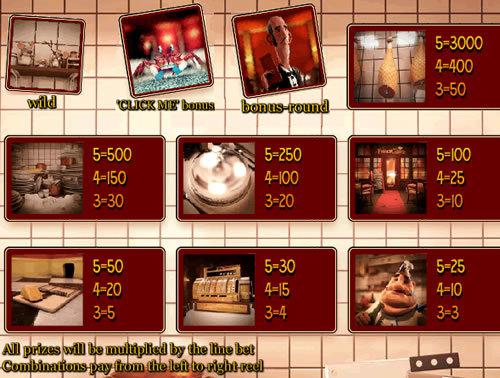 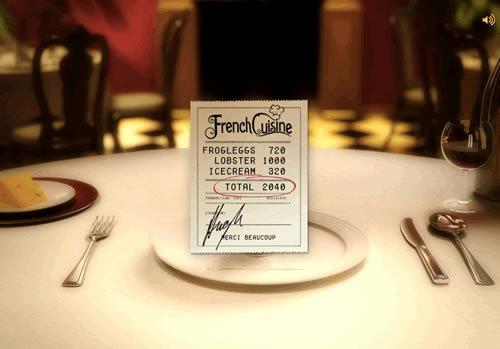 Turn up the sound in French Cuisine 3D slots and you'll laugh at its 3-dimentional animations.

Has coin sizes ranging from $0.01 to $5 and a choice of 1 to 5 coins per line. The minimum and maximum bets in this culinary game are $0.20 and $500 per spin while playing with all its twenty lines.

French Cuisine slot game play will go from left to right except for the Crab scatter and the Waiter scatter which will play according to the pay table.

More culinary combinations can be made when the Mice on a Shelf Wild symbol expands, making for a more palatable win by adding extra coins to your total.

French Cuisine slot game has two Scatter symbols; the Crab Scatter with its tall beady eyestalks and the Waiter Scatter with his tall skinny head:

French Cuisine slots Click Me Bonus is activated when the three Crab symbols appear anywhere on reels 1, 3 and 5 at the same time:

French Cuisine 3D slots Feature Bonus is triggered when the three Waiter symbols appear on reels 1, 2 and 3, and on an active payline. Once the feature is activated, a new screen will appear with the Bonus Round instructions:

The object in the French Cuisine slot Feature Bonus game is to choose a dish that the mice didn't find before you have.

Play French Cuisine 3D slots and see if you can beat the mice to the culinary dishes for big coin rewards! 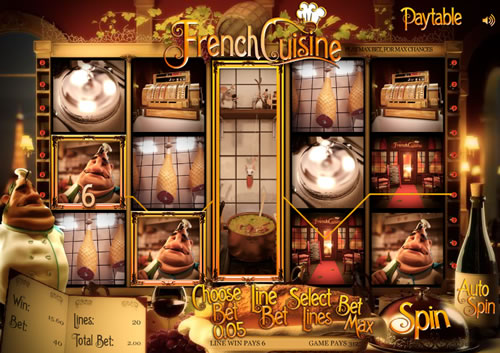