Dolphin Reef has not been rated yet. Be the first to rate it! 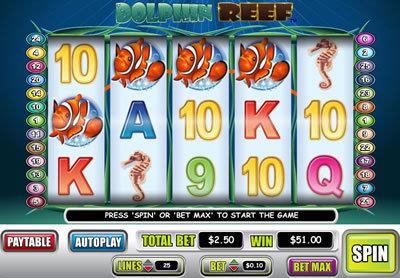 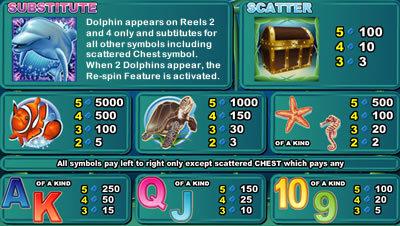 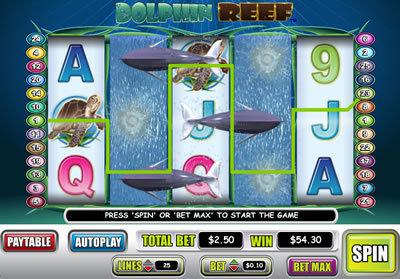 Dolphin Reef slots have 5 reels and 25 paylines, with a re-spin feature that has two wild reels offering large payouts, wilds, and paying scatters in its undersea adventure!

When the Dolphin Reef slot feature game flip-pers into gear, you will be greatly rewarded for the wait. Find out more in the Re-Spin feature information below.

There are only two ways to adjust the wagers, and that’s by adjusting the “Bet” amount or the “Lines” amount at the bottom of the game.

Plus, you can choose to play between 1 to 25 lines (playing all twenty-five is recommended) by selecting the up and down arrow buttons beside the “Lines”.

There are a total of twelve symbols in the pay table, four of which offer a coin return when only two-of-a-kind appear from left to right. The rest of the symbols will need three-of-a-kind for a payout.

The highest paying symbols are the picture symbols. Keep your eyes peeled for the orange and white-striped Clown Fish symbol; it awards the 5000-coin jackpot when five appear on an active line.

Is the Dolphin symbol, which is the game’s substitute and a lot more:

The underwater Chest symbol is the Scatter in the game, and that’s basically it, other than with a collection of scatters there are coins awarded:

Is triggered when a Dolphin symbol appears anywhere on reels 2 and 4 at the end of a game:

The best part about the Re-spins Feature is when it is first triggered; all symbols that form winning combinations upon activation of the feature will be paid!

Plus for an added touch of animation during the re-spin feature, there are three dolphins that jump in the ocean waters on reels 2 and 4; from Reel 2, over Reel 3, to Reel 4, and visa versa.

Play the Dolphin Reef slot game, catch the re-spin feature, and watch the dolphins flip extra coins into your balance!