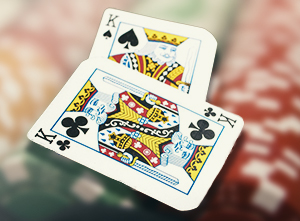 Omaha poker, often called Omaha High poker or Omaha Holdem poker, is played much the same way as Texas Holdem poker. The biggest difference is that each player receives four hole cards and must use exactly two of their hole cards and exactly three community cards to make their best five-card hand.

Please read that again. You must use exactly two hole cards, not one or three or four. This can cost you a great deal of money if you forget.

Omaha poker is usually played 9 or 10 handed at a full table and is played in limit and pot-limit. One person is designated as the “dealer or button”. The dealer has the advantage of acting last on each round of betting except the first.

In limit Omaha poker the raise can only be the lower limit ($2 in our example) the first two betting rounds and the upper limit ($4 in our example) the last two rounds. In pot-limit, the raise can be any amount up to the size of the pot, as long as it is twice the previous bet, up to the total you have in front of you. The size of the pot is determined by adding the amount in the pot to the amount you would have to call before raising.

For example, if there is $8 in the pot and the last bet was $2, you could raise up to $10 by placing $12 in the pot. You are calling the $2 bet bringing the total to $10, and then raising the amount of the pot. Play continues to the left until everyone has either called all bets or folded in Omaha poker.

The second round of betting starts at this time with the first person to the left of the button still in the hand. Each player may either check to the next player, place a bet, or call or raise if there has been a bet. After this round of betting, a fourth card, called the “Turn” is placed in the center of the table, followed by another betting round.

Remember that in this round and the last one the bets are twice the size of the first two rounds. The final card, or “River” is placed in the center and the final round of betting takes place.

Each player then uses two of their hole cards with three of the community cards to form their best five-card hand. The player with the best hand is awarded the pot. In the case of two hands that tie for the best hand, each of them is awarded half of the pot.