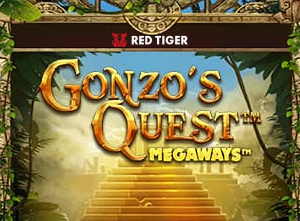 Gonzo’s Quest is one of the most popular slots in recent iGaming history. Players who love this game will be happy to hear that its successor is finally being released - the sequel, Gonzo’s Quest MegaWays has been officially presented by Red Tiger Gaming.

The renowned provider has revamped one of the most beloved titles in the entire industry, and all slot players will probably be thrilled with the new exciting additions.

The Game That Made History

NetEnt originally brought Gonzo’s Quest to the gaming market. The instant hit was one of the supplier’s best-performing titles, so some might be confused as to why the sequel is coming from Red Tiger Gaming.

The exciting slot was the first game ever to use cascading symbols instead of a conventional reel. This has entitled it to become an important part of slots history that should never be forgotten as it has revolutionaries the gameplay.

Now its sequel is following its footsteps...

Just like its predecessor, the new release invites players to join the unique adventure on the Spanish explored quest for El Dorado. While the elusive treasure city probably will stay hidden forever, the thrill of the chase has inspired many games, but Gonzo’s Quest is definitely the most famous one. Its sequel comes with a potential win of 20,000x the stake!

Besides megaways engine, the slot also features one of the most famous Red Tiger’s in-house innovations:

Red Tiger is still riding the wave of success…

…having just come off the triumphant week - the company won in five categories during the EGR B2B Awards. If was announced as the best slot supplier, as well as the top company for Innovation in Slot Provision, while three other titles were related to the brand’s accomplishments in the mobile iGaming sector.

…the brand has launched the long expected Gonzo’s Quest MegaWays. A release that has become a hit amongst players overnight.

“Gonzo’s Quest™ has consistently proven itself as one of the best slot games on the market, so we are delighted to give it a further boost with the renowned MegaWays™ mechanic. The team has worked tirelessly alongside our partners at NetEnt to deliver this summer’s most anticipated slot. We are thrilled to see the collective effort rewarded with a fantastic new release.”