The Lioness is Coming Soon 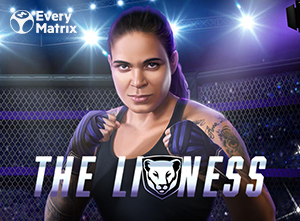 Amanda Nunes is widely considered to be the best female fighter in the world, and her accomplishments back up that claim. She is a two-time champion in UFC, having won both the bantamweight and featherweight titles. She's also defended her title successfully three times in a row. In addition to all of that, she has also won five Performance of the Night awards. If you're a fan of Amanda Nunes, or just want to witness the greatness of one of the best fighters in the world, then you need to check out The Lioness. This game captures Amanda's unlimited ambition, passion, and grit which has made her one of the most dominant forces in MMA today. So be ready on 2nd August and enter the cage with Amanda Nunes and experience her greatness for yourself!

Enter the Cage of the Greatest Female MMA Fighter

Looking for a slot that roars with excitement? This game features 6 reels, 4 rows, and has 40 active paylines and this slot is packed with features that will have you coming back for more. With a 93.79% RTP and big win potential, The Lioness is a must-play for all slot lovers.

The unique Fight Feature is one of the many highlights of this great game. With every punch thrown and every victory achieved, you'll be one step closer to winning big. This game also has the Fortune Bet feature, Lioness Link feature, and extra spins.

EveryMatrix is an online casino provider that has been active in the casino industry since 2008. This brand holds several significant licenses that enable them to operate legally in many key online gambling markets. The company is mostly concentrated on its platform and offers players premium games from leading software providers. It puts a lot of effort to reach as many players around the world, which makes them so important for the industry. It has a license to operate in Malta, where its main offices are and is also licensed in the United Kingdom, Ireland, Denmark, Curacao, Spain, and Romania.