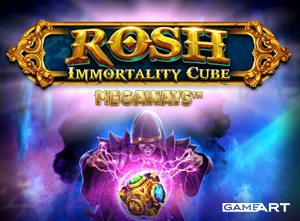 As one of the leading providers of slot solutions, GameArt, has once again prepared an exciting game for its players. The brand’s portfolio has become richer for Rosh Immortality Cube slot which is the first Megaways title by the studio.

Follow the main protagonist Rosh on his way to the universe and you will encounter the array of excellently designed symbols such as dark magic, princesses, and scary beasts. Multiple special features with increased winning potential can be triggered along the way, making the whole gameplay much more thrilling.

Game That Brings Things to a Whole New Level

GameArt has established itself as the renowned provider of slot games for the online and land-based operators. Many industry’s awards that the brand has won over the years is a true testament to the quality of its products.

With offices in several locations including Italy, Malta, Serbia, and Slovenia...

…the studio has extended its footprint worldwide so that players from many jurisdictions can enjoy its games. The company is successful in delivering a package of services such as bonus tools, CRM, business intelligence solutions, and similar which increase the level of engagement and overall ROI.

Still, the main focus of the provider...

…lays in providing exciting titles that punters will love to play and online operators will eagerly include into their offering. Some of its slots were instant hits such as Book of Alchemy, Dawn of Olympus or Joan Of Arc that are still on the list of the player’s favorites.

The new Rosh Immortality Cube Megaways slot is no different, as it brings originality and an array of engaging special features.

But according to the Stefano Picone, CEO of GameArt, the studio’s latest release officially launched on September 22 is a true game-changer.

“All of our games stand out from the crowd, but Rosh Immortality Cube Megaways™ takes things to a whole new level.

“By combining the uniquely rewarding Megaways™ features with a truly atmospheric fantasy world, led by feedback from player’s themselves, we’ve created something that’s sure to appeal to slots fans everywhere,” said Picone.

Lovers of fantasy themes will certainly appreciate this original game with all the characteristics of the modern, new slots. As the main protagonist, Rosh is a wizard battling the forces of evil. Saving the world is a heavy burden on his shoulders as he encounters horrifying creatures in a dark journey to another world. Sharpen your blade and enter a world of forbidden magic, beautiful princesses, fearsome dwarfs, vicious orcs, and unholy abominations.

With an incredible 117,649 potential Megaways™ to win, cascading symbols, and fully-loaded with extras...

...this is the most explosive game yet by this provider. With special features flying left and right, the gameplay is thrilling. Since the volatility is at the highest level, it might be more suitable for veteran players rather for beginners still figuring out the right playing strategy.

…landing 3 Rosh scatters will trigger a mystery symbol feature. It will activate one of three options:

The appearance of 4, 5, or 6 Rosh symbols at the same time on reels will trigger 8, 10, or 12 extra spins respectively. During complimentary spins, all symbols are replaced with multipliers up to 100x, while landing of the Mystery symbols will double the value of all the multiplier symbols.

Collect them to multiply symbols - starting with 2x, and adding them all to its own total - or remove them to get rid of the lowest multipliers on the reels, freeing up space for bigger ones. If the Rosh scatter appears on reels during extra spins, it will unlock the 6th reel, adding even more winning possibilities.

The provider wonders: Do you have what it takes to achieve immortality with Rosh? Good news is that there is a demo version of Rosh Immortality Cube slot if you wish to test it before playing in real money mode.