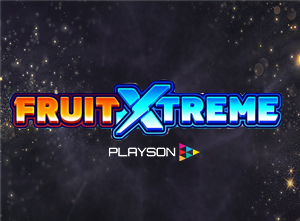 Game developer, Playson, has started the new year with a new release. The game in question is Fruit Xtreme, a loving homage to classic fruit machines featuring contemporary graphics and gameplay.

It’s a recipe that the developer has come back to time and time again first with their Timeless Fruits series and now with the Funky Fruits series.

This new series opts for a different art style that is more comics-inspired.

Funky Fruits have debuted at the ICE London 2020 where the developer is exhibiting their various offerings from the 4th to the 6th of February.

In addition to the new game series…

..the developer is also showing off their promotion tools aimed at increasing player engagement and retention.

The newest entry into the series is a homage to the illustrious past of fruit machines but offering new twists.

A 5x3 game with five paylines might seem totally classic…

…but a new and innovative multiplier system keeps things fresh and interesting.

Specifically, if consecutive reels are filled with the same symbol a multiplier will be applied. It’s x3 for three reels, x4 for four, and x5 when the entire game board features the same symbol.

The symbols themselves recall the classics. Melons, oranges, lemons, plums, and cherries are familiar to anyone who has spent any time playing online video slots.

There is also a scatter symbol that pays regardless of its position on the reels.

With medium-high volatility this game takes everything to the extreme and brings enhanced excitement to punters. Even the most intrepid players will find themselves entertained by this offering.

…Fruit Xtreme scales back the features and gimmicks to offer a more streamlined and classical take on slots. It’s all about spinning and winning without distractions.

Vsevolod Lapin, Head of Product at the developer said:

“Fruit Xtreme is a stylish new take on the traditional fruit slot and a worthy new member of Playson’s ever-expanding suite of titles.

“We look forward to showcasing Fruit Xtreme at ICE London and showcasing how our comprehensive offering is a fantastic addition to any operator’s portfolio.”

Playson is a leading game developer that supplies its certified and tested content worldwide. They operate on regulated markets such as Malta, Italy, Sweden, Spain, and the UK.

The company’s portfolio includes more than 60 omnichannel games as well as a selection of promotional tools.

With offices in Malta, Ukraine, UK, and Greece, the developer is set to expand their presence on the world’s igaming markets.

During ICE London 2020 the company will be exhibiting their new offerings at Stand N7-110.