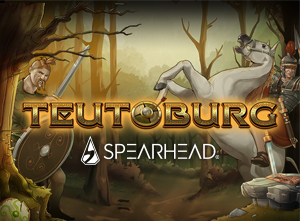 Creative iGaming provider, Spearhead Studios, has introduced a new release called Teutoburg. It is a very special release since it features a historic theme, which makes it the first title with this storyline by this developer.

Players have been looking forward to the studio’s historic-themed slot, and its finally here. Following the legend of the actual Varian Disaster or Battle of Teutoburg Forest that took place in the 9th century, the long-awaited game certainly won’t fail fans of the genre.

Transporting the epic battle when Germanic tribes ambushed and destroyed three Roman legions from the history books to the reels, the title provides hours of action.

Specially designed to answer the expectations of German players...

…this is the second video slot of the company, following the launch of Black Forest in mid-August 2020.

The newest release comes with an RTP of 96%, and a maximum winning potential of up to 16,000x the stake! Due to its medium to high volatility, it is suitable for both veteran players and punters eager to demonstrate their slot-playing strategy.

Changing the Game One Slot at a Time

As a part of EveryMatrix group of companies, the studio’s mission is to “challenge the ordinary” and it does through the development of high-quality HTML5 video slots, table titles and other online real-money games. By making their products both fun and fair, the brand is trying to “change the game of game making” and it always brings something new on the table with each new release.

“We put a lot of time and effort into perfecting the math model to ensure that the features delivered real excitement and player value. Our creative team strove to create engaging visual effects and a rousing soundscape, to compliment both the game’s features and to fit with the historical theme we had chosen.”

Besides superb graphics that follow the great representation of the historic event, players can also enjoy an array of interesting features. The spotlight is placed on mystery symbols that reveal high-paying German or Roman cavalry, archers or infantry.

Better yet, they tend to appear on the reels rather frequently during the base game, but also on every complimentary spin.

…and bring the famous battle closer to players, the studio has added a special feature where mystery prizes can potentially reveal German symbols and emerge next to the Roman images, triggering an ambush. The embattled Romans are either converted into Germans or Multiplying Wilds, increasing the winning potential significantly.

Another highlight of this game is the complimentary rounds. A great benefit is the ability of extra spins to be retriggered. When they do retrigger, the number of mystery prizes increases and with it the possibility of getting some very impressive wins.