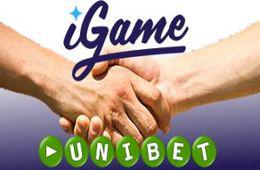 Since the beginning of the year, and even as far back as the middle of 2014, we've been seeing a lot more mergers and purchases in the online gambling world than we've probably ever seen before. Lots of companies have been executing extremely strategic purchases recently, and it's creating a situation where a lot more connections have to be remembered than ever before. The latest of these is the purchase of iGame by Unibet that was finalized in the past week.

Details on the Purchase

The purchase itself wasn't that large compared to some other deals that have reached the nine-figure mark in the past month or two, but it's significant because of how much attention iGame has been getting lately in general. The purchase was for €59 million, and iGame is definitely worth the price considering how players have been absolutely loving them with a level of popularity that you don't often see from relatively newer sites. This deal expands Unibet's reach a sizable bit, and it shows that a model like iGame's can see success in today's online casino environment.

Why is iGame So Popular?

iGame has built up a lot of popularity for a few reasons. First, they seem to focus a lot of attention on the user experience overall. This includes how their software is handled and the game selection that they have available. Second, they've paid a lot of attention to how their promotions are handled, and they constantly have something cool going on that gets people excited. This is a strategy that many casino sites could learn from because players hate dealing with the same old thing over and over again.

There have been a lot of acquisitions happening over the past 12-18 months, and one of the reasons for that is the new era of regulation in the industry. Getting a foothold in a particular country's regulated marketplace is extremely important because it's not a big free-for-all anymore. Sites have to be licensed to operate in a lot of different countries, and when a company has a sizable audience in one place, that makes them a juicy target for a larger company to purchase them to take on that audience as a strategic business move.