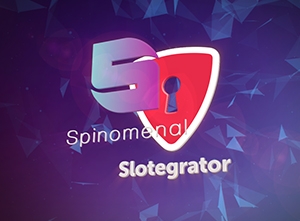 Online casino game provider Slotegrator has announced the addition of Spinomenal HTML5 slot games to their already robust line-up on offer to new and existing casinos worldwide. Spinomenal specializes in device-agnostic games that can be played on any platform.

Spinomenal currently has over 70 games in their portfolio and release new games regularly. In late 2015, the developer released 15 new games in a single month. Some of the games in that batch are still favorites for many Bitcoin casino players, which is where most of their slots have been found in the past. The 50 pay line "CodeName: Jackpot" features wilds, free spins and a bonus game as do most of the games from Spinomenal.

Spinomenal is an Israel and US-based company that was founded in 2014 by Lior Shvartz and Omer Henya. They found their first successes in the social gaming world before entering the real money gaming sphere. Game themes are varied as are math models, giving players a good variety to choose from. The games load quickly even over low bandwidth connections and are exclusively executed in HTML5 to be true cross-platform ready.

Other Developers Found on Slotegrator

The company's games join the work of pioneers and legacy developers available from Slotegrator including slots from Microgaming, NextGen, Quickspin, Genesis, Habanero, and Rabcat among others.

In an announcement on the Slotegrator website the company said: "Slotegrator welcomes the new partner to its friendly team of developers! We are sure that games by Spinomenal will meet the needs of our clients, regardless of concept and target audience of a particular online casino."