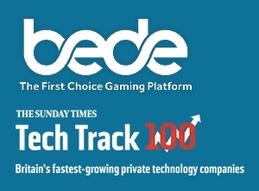 Bede Gaming was recently recognized by the Sunday Times in London as one of Britain’s fastest growing companies in the technology, media, and telecoms (TMT) sector. An awards dinner was held Tuesday night to recognize the emerging concerns and Bede placed at number 76 on this year's league table.

The 100 companies combined turnover for the year was £2.9bn showing a marked increase from 2001 numbers of £414m. The explosion in growth over the period illustrates the tech sector's success year after year.

Bede was launched in 2012 and supplies platform technology for online gambling. Some well-known names that have seen their products deployed on the Bede platform in less than 8 weeks include Blueprint Gaming, IGT, Novomatic, NetEnt, Microgaming and several more. Bede processes more than ten million transactions every month. Their content can be found on casinos such as betUK Casino and others.

Clocking in at number one on the Sunday Times list was Wonderbly, a company that has sold nearly 3,000,000 customized children's books in over 200 countries worldwide.

Hiscox Insurance sponsors the Tech Track 100. Managing Director of Alternative Distribution there, David Head said: "The companies making up this year’s league table are testimony to the great depth of entrepreneurial experience in the TMT industry. Such a breadth of skills and experience matters more than ever, as the widespread adoption of internet-based technology means almost all businesses are tech companies now. Congratulations to all the companies featured this year.”

Bede Gaming CEO, Michael Brady spoke of his company's growth in the international gaming market while still staying close to its roots in the North East of England. He added: "It was great to meet with such titans of the British technology industry and a proud day for Bede Gaming to be in such company. The breadth of knowledge in the room was inspiring and my thanks go out to The Sunday Times and Hiscox for this recognition," according to an announcement on the Bede Gaming website.

In late October Bede was mentioned at another important industry event when two of their top clients were listed on the EGR Power 50 list. Intellectual Property and Software (IPS) launched an online casino on the Bede platform in the summer of 2015 and placed on this year's list at number 40. The Rank Group, which switched to the Bede platform in 2016 has seen phenomenal growth in their Grosvenor digital products. Rank placed at number 17 in the Power 50 listing moving up two spots from 19th place last year.