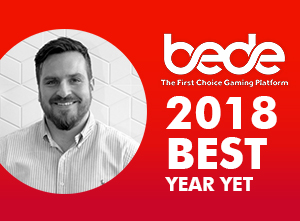 A big announcement has come from Bede Gaming recently. They have announced that 2018 is officially their best year ever, and it comes after months of consistent growth and great deals that have put them in a more influential position than ever before. This is the kind of thing that a company in this industry definitely has reason to celebrate.

The Heels of Big Agreements

One of the reasons they have had such a big year is that they have made some tremendous deals like this deal with Habanero Systems to to host their games on the PLAY platform produced by Bede Gaming.

Other important deals have happened this year as well. This includes a major integration 12 different times in 2018, which represents a significant increase over last year. On top of that, they've started working with other big names like Pragmatic Play, Yggdrasil Gaming, SBTech and Play'n Go. Along those lines, they were chosen by the Ontario Lottery and Gaming Corporation to revamp their entire digital platform, which has struggled previously.

With 2019 just around the corner, Bede Gaming is looking to use the momentum they have right now to make it their best year. They're planning on doing this by getting into more integrations and expanding even further. This includes the expansion of their PLAY platform and more software partners that include content on that platform. It's a great approach with some of the greatest names already like Microgaming, NetEnt and Evolution Gaming, so they clearly already have the attention of players.

From there, we'll just have to wait and see what innovative ideas they have. While they have been around since 2011, they've used that time extremely wisely and have put themselves in a position to be an industry leader when it comes to providing operators with a great software platform. We're sure they'll have lots up their sleeve for the new year, and we're excited to see what they do.