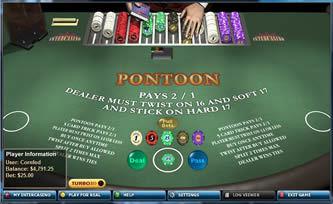 If you’re a born-and-bred American Blackjack player, it may be time for a little “21” vacation. Cryptologic’s “Pontoon” is the blackjack of the British world, where you’ll learn an entirely new vocabulary playing a variation of a very familiar game.

First, let’s go over a few translation items. In Pontoon, to Hit (aka tell the Dealer you want another card) is to “Twist” and to Stand (telling the Dealer you’re good to go) is to “Stick”. It’s kind of like the difference between coffee and tea, except these words sound more like dance moves. You’ll also notice that “Buying” is the same as Doubling Down. You may be happy to know that the word for Split is “Split”.

Next, the rules. Pretend that Pontoon and Vegas Blackjack are exactly alike, with the following exceptions:

Cryptologic Pontoon is played with 8 decks of 52 cards, and they are shuffled after about a third of the cards have been played (although you’ll hardly notice it).

The same shortcuts and quick-keys that you’ve grown to love in Crypto software are in Pontoon as well. You’ll still be able to do a bit of customizing, too. 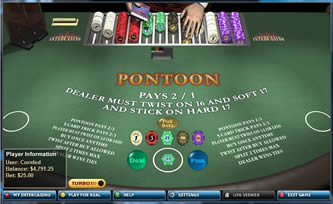