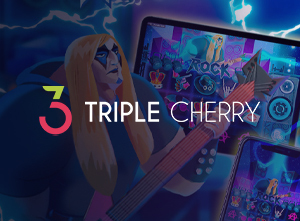 Becoming part of the industry in 2018, Triple Cherry (TC) quickly became recognized for its huge passion for 3D technology. To build an authentic story, a team needs to be comprised of the finest mathematicians, graphic designers, software developers, audio engineers, and that’s precisely what the TC community has.

How Does Triple Cherry’s library of slot games look like?

Colorful is the best word to describe, but it’s not only because they use a rich spectrum of colors to paint their characters and symbols. It also refers to a wide range of themes seen in the portfolio, as well as all other crucial elements of their releases.

Thanks to this unique blend of old and new elements, great vision, and tons of positive energy the entire team possesses, they managed to ink several significant partnerships deals. Some of the names from the network of their associates are BetConstruct, Tecnalis, Pariplay, Emara Play, MrSlotty, Slotegrator, Latam Win Grupo, Salsa Technology, and many more, making their top-class products available to clients from all corners of the world.

If you want to take a closer look at Triple Cherry’s slots and find out more about the features, keep reading!

How Versatile Are the Topics the Studio Utilize?

Extremely versatile is the least to say, as TC wants to show that inspiration is everywhere around us. Those are mostly classic themes, seen in titles from other software developers as well, but they do have some unique atmosphere.

Tomoe’s Sushi Bar, for example, finds inspiration in Japanese cuisine, while Mega Chef brings the authentic flavors of Italian dishes. Punters can also find an interesting homage to beer and German taverns in Elsa’s Bierhaus, along with a tribute to Carnaval Do Rio.

…a 1x3 classic release for fans of vintage games and original machines, Starfall Mission which takes players on a space journey, as well as Monsters Fear Bullets which challenges punters to test their skills and defeat the menace.

Judging by these highlights, one can conclude that TC’s imagination is limitless, and what’s even more important- the team has deep knowledge and the right tools to bring those interesting stories to life.

In combination with other elements, the features they utilize do give the right atmosphere to each of the titles. One of their specialties is mini-games, some sort of side missions, but with a theme that draws inspiration from the main story.

The mentioned release inspired by delicious Japanese food, which is designed as 3x4x4x4x3 reels and 40 paylines comes with an interesting challenge. A player is supposed to combine sushi pieces and win extra prizes or complimentary spins.

…one can find respin feature with ROCK locking Wilds, respin sequence with heads or tails, Roulette bet multiplier, special respins, chest mini-game, Stacked Wilds, and the list goes on and on. The RTP gravitates around 95%- 96%.

Also, their releases are optimized for various platforms (desktop and mobile) and can be switched to a multitude of languages and support a spectrum of currencies, meaning they are suitable for an international clientele.