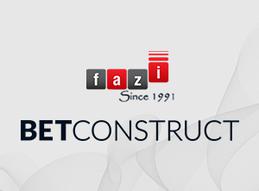 The online casino platform available from BetConstruct has more than 4,000 total titles available, making it one of the platforms out there with the deepest overall portfolio. However, this portfolio has gotten even deeper now thanks to a new distribution deal they have made with Fazi. This deal will have all of the latter's games added to this platform.

Every single one of Fazi's games are going to be available on BetConstruct's platform as a result of this agreement. This is interesting in a way because they have some titles that are a bit redundant like roulette that will also be included in the deal, and titles like this are usually removed from the list that are brought over. We're not sure how we feel about that particular aspect of things since it seems like a bit of a ploy to over-inflate the numbers available on the platform total, but that's a very minor detail in the overall scope of the deal.

All of the titles from this provider are also available in HTML5, and that will make the migration process a lot easier than it could have been otherwise. That's the sort of thing that a lot of players take for granted these days, but in the middle of a deal like this one, it's one of the more important details. Both desktop and mobile players can access the vast majority of their games as a result of their usage of HTML5, and it also means that their games will be brought over more quickly into this new platform.

BetConstruct has won plenty of important awards for their work in the online casino industry. What stands out the most from what they offer is their overall platform, which has titles from tons of top developers and which puts players in a position to get virtually everything they could possibly want all in one place. Not needing to jump around from site to site means more brand loyalty, which in turn is a win-win situation for everyone involved. It's a win for players since they don't have to move around so much, and it's a win for the casinos since they get more loyal fans.