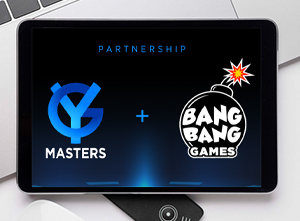 The Gods of ancient Greece who give away wild multipliers on extending reels and show players numerous ways to trigger free spins – is that even possible? Yes, if we talk about Bang Bang Games slots, a London-based software developer recently appeared on the iGaming scene.

Founded at the beginning of 2020, the brand garnered a great deal of attention just several months later when it launched the very first in-house game called Wrath of Gods and created in close collaboration with Endemol Shine Gaming. Since the novelty was distributed through the Yggdrasil’s extensive network of operators, millions of punters could appreciate its crisp visuals and engaging extra features.

... is not a typical 5-reel story but rather a top-notch experiment intended to stand out of the crowd – a tough task, given the vast sea of spinning adventures available at online and mobile casinos. Well, truth to be said, people behind this story are far from being rookies in making world-class games. Quite on the contrary, all members of the small yet incredibly creative team, have years of first-hand experience under their belt.

Created by Yggdrasil to enable third-party studios to access the global decentralized aggregation system, the YG Masters program has been a jumping-off point for many emerging developers such as True Lab, Northern Lights, or Skyrocket Entertainment, to name just a few.

Following in their footsteps, Bang Bang Games decided to take advantage of the ground-breaking GATI product set up by the renowned Stockholm-headquartered company. Short for Game Adaptation Tools and Interface, GATI not only facilitates the rapid and secure content building but, what’s the most important, its placement on virtual shelves of international web-based playing houses.

... YG Masters is the future of casino content aggregation, so no wonder, BBG’s team has immediately recognized huge opportunities delivered by GATI at the absolute highest time to the online gambling market. Another nice detail is that all project partners can cross-sell their games to any Yggdrasil Franchise worldwide and share their respective games roadmaps, at the same time, creating new ways for cooperation.

Aiming to be a stress-free, one-stop-shop for state-of-the-art pastime, this software developer has never thought of producing ordinary games or copying other people’s ideas. Despite the fact, the first of Bang Bang Games slots Wrath of Gods (made in cooperation with Endemol) is based on a widely used theme, its Mount Olympus offers a totally different view on wealthy and prosperous ancient Greece.

While wrath in the name...

... might lead you to think of the powerful deities as grumpy and even spiteful squad, in reality, they are the most kind and generous guys you can meet playing slots. For instance, just to please you, handsome Zeus will not only gladly unleash thunder and make wild the entire middle reel but also graciously attached to it a multiplier!

Speaking of the originality, let’s start with the reel layout – shaped like a pyramid, it features three rows with a varied number of reels: seven at the bottom and three at the top. The base game starts with 10 fixed pay lines, which, again, are everything but usual as any adjacent symbols pay! In the course of the play, punters can activate up to 30 lines that appear as a result of expanding reels. Free spins are also a part of the plot, as well as some other treats you’re better to see for yourself.