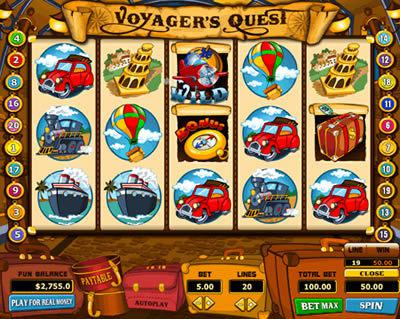 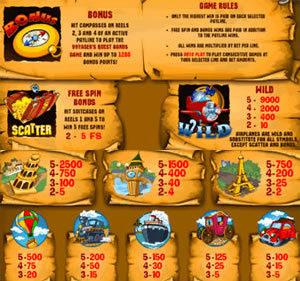 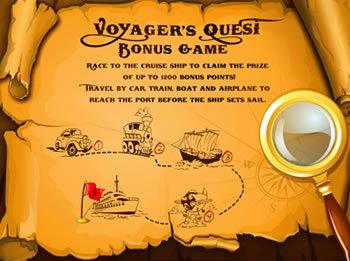 Voyager's Quest slot has bonus games, free spin bonuses, two kinds of scatters, flying wilds, and a 9000 coin jackpot in its 5-reels and 20-paylines using Top Game software. This Voyager's Quest slot review will talk about traveling picture symbols, which ones will give you bonuses and others that give more coins during the game.

While playing Voyager's Quest slots one cannot be without a compass or coins, like in a real voyage, and these can give a bonus or free spin game. And most travelers prefer to travel by plane, which is the wild in this game, because planes can make a journey faster and save money too, the same thing goes with symbol.

Voyager's Quest slot will show most all means of transportation in its picture symbols, on the ground, the sea, or in the air, with payouts ranging from 5 coins to 500 coins when three of them land on the payline. And those symbols are a red car, a stagecoach, an ocean liner, a train, and a hot air balloon.

The Voyager's Quest slot payouts and symbol play will be from the left to the right except for the compass and money suitcase scatters which make their play elsewhere on the reels.

The Voyager's Quest Free Spin Bonus game will be activated when suitcase symbols appear anywhere on reels 1 and 5 at the same time:

Get ready to set sail in the Voyager's Quest Bonus Game, when it's triggered with three bonus compass symbols on reels 2, 3, and 4 at the end of a game. Your quest is to make it to the ship before it leaves port.

There are four modes of transportation in your travels as you make your way to the cruise ship; a car, a train, a sailing ship, and an airplane:

Play the Voyager's Quest slot game, make it to the cruise ship during its bonus, and sail away with loads of extra coin! 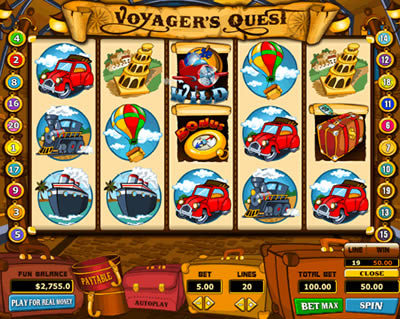