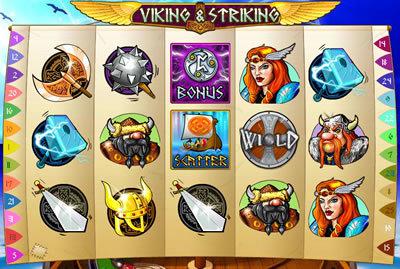 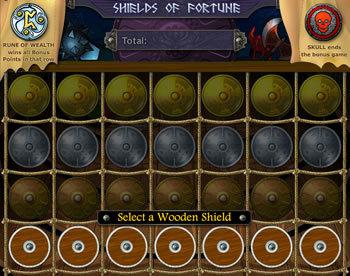 Viking Striking video slot is a fairly basic 5 reel 25 payline game, but, there are voyages in the bonus games and free spins, and the wilds will help you win battles for extra coins. Get five runes and make it all the way through a Viking bonus game, you may be fortunate enough to win up to 9000 coins!

The symbols during the era in Viking Striking slots will put players in the mood as there are five Vikings that give a payout with just two on a payline, and the big man in blue will hammer-out 5000 coins when five of him land on a line.

The lower paying symbols in Viking Striking online slots will give from 5 coins up to 250 coins as Thor's Hammer strikes five times on an active payline.

You won't have to take up the Viking's ways in the Viking Striking online slots wagering, because all you need is $0.01 to play one line, or play a ranged amount from a cent up to $5 per active line. If you've got the big hammers on your side you can wager the max of $125 per game if you wish.

All Viking Striking slot symbols will play from left to right except for the rune Bonus or the ship Scatter symbols. The Rune Scatters play on an active payline and the Ship Scatters play anwhere.

Get 3, 4, or 5 Viking Ship scatters to float anywhere on the reels, then the Viking Striking Free Spins feature is triggered with the following rewarded free spins:

Ahoy mate! These Viking Striking free spins can be retriggered during this feature!

Viking Striking slot Shields of Fortune Bonus Game is triggered when 3, 4, or 5 Rune Bonus symbols land on an active payline. When this happens, the game instructions will appear, select "start", and then the following shield scene will appear:

Play Viking Striking slots bonus games and see how many coins you can collect! 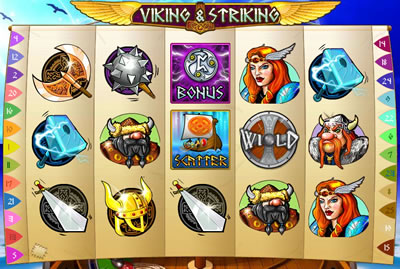