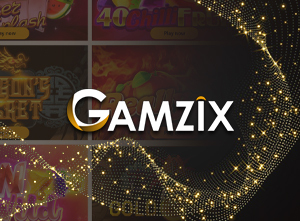 Established at the end of 2020, this creative gang presented itself as a professional team that relies on the latest technology. Equipped with plenty of experience, they are determined to deliver the best products- the ones which excel in visuals, sound, and mathematic.

So far, they’ve gained the RNG certificate and aligned with several brands, quickly grabbing the attention of both potential business partners and players.

Are games from Gamzix’s creative workshop enhanced with some inventive features?

Analyzing their releases, one will find Wilds, Scatters, and similar commonly seen options, but they DO come with a twist. For example, one of the titles comes with a Gap feature, which in its essence is a sort of multiplier, but with some extra powers.

Which Topics Does Gamzix Use in Games?

There’s one interesting formula which a majority of content producers implement, and Gamzix is definitely not an exception.

…they’ve selected some classic topics for their initial batch of slot releases. As assumed, there are fruit-themed titles, but those inspired by various civilizations and cultures as well.

Some would say that such an approach is not inventive, but on the other hand, one cannot deny that games featuring those themes gained the reputation of an evergreen classic.

That’s the main reason why a vast number of developers have them in their portfolio, as there are and will always be clients who label those as favorites.

Taking a Closer Look at Features

To be able to get an as better insight into the features the studio utilizes, let’s analyze several releases from their library and see where things stand.

Banana Bar, full of positive vibes comes with a generous portion of complimentary rounds, which is awarded when three or more Scatters hit the reels.

Plus, it bolsters Magic extra spins, which are triggered randomly during a game that doesn’t activate extra spins. On top of that, there are 4 JP levels, Mega, Major, Minor, and Mini.

Full of mysteries and secrets, the Gold of Maya hosts Wild, Scatter, extra spins, but a special one dubbed Gap Feature. What this option does is increasing the win multiplier after each winning session. Like the previous one, it contains the same amount of Jackpots.

Then, Go Wild has a Wild with a twist- it holds the reel and triggers Respin of the other reels. Moreover, the same quartet of JPs is found in this title as well. Really Hot is the simplest one of all, packed with x2 multiplier and a set of Jackpots.

Dragon’s Secret brings Stacked Wild and Stacked Scatter, extra spins, and JPs, which promises plenty of action on the reels.

…are more than enough to hint that they rely on some most popular and most widely present options, but spice them up with several special characteristics.

In terms of volatility, it’s low to mid, while the RTP revolves around 96%. Taking all into consideration, one could say that their target audience are clients looking for simple yet dynamic games.