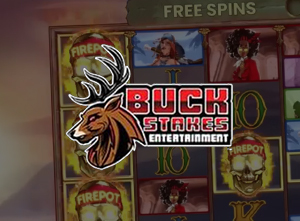 Whatever your taste in casino games, chances are you’ll be impressed by online slots from Buck Stakes Entertainment. This young software developer hales from South Africa and is based in beautiful Durban, so it comes as no surprise that the team draws inspiration from the country’s fascinating nature and rich culture. Both the name and the logo of this studio speak for themselves, highlighting the connection to the SA native buck.

The company was established in 2021 by iGaming veterans and their vast experience and expertise were immediately recognized by Microgaming. The latter greeted BSE with open arms as one of the independent studios that provide exclusive content for the industry’s legend from the Isle Of Man. The first brainchild to go live as the result of this fruitful cooperation was 8 Golden Skulls of Holly Roger powered by Megaways™ mechanic licensed from Big Time Gaming.

Let’s take a closer look at what games made by Buck Stakes have to offer to all fans of top-notch online slots.

As you’ve probably already guessed, as a recently emerged software developer, Buck Stakes Entertainment doesn’t have an extensive portfolio, not least because this studio strives to create unique games that do not look like one another. 8 Golden Skulls of Holly Roger Megaways™ is a pirate-themed title but with an unexpected twist – all characters are women. Led by fearless Charlotte, they are not only brave but also good-looking and, what’s most important, can deliver hefty payouts.

The engaging swashbuckler story (did you know that a swashbuckler actually has three faces?) is followed by a classic 4 Diamond Blues Megaways™ that lets players plunge into the wondrous world of well-familiar and widely beloved bars, red sevens, and lucky four-leaf clovers. Precious diamonds add both to the luxurious look and the winning potential of the game scheduled to appear at online casinos in September 2021. No doubt, just like its predecessor, this gem-packed release is going to be a true masterpiece in terms of artwork, graphics, and animation.

Ask players what makes a decent online slot and the majority of them will say it’s all about extra features. People from Buck Stakes Entertainment obviously know how to create an awesome spinning adventure because their games are brimming with innovative add-ons.

For instance, 8 Golden Skulls of Holly Roger Megaways™ has Rolling Reels, the Firepot jackpot, Mystery Symbols, and Bonus Wheel that award free spins with multipliers. The former is available in both the base game and free spins and is triggered on every win, replacing winning symbols with new random icons for an additional chance to land a win.

3 or more special Firepot symbols bring cash prizes while hitting 8 of a kind awards the hefty jackpot. Mystery icons can appear randomly on every reel to reveal a hidden symbol and trigger a win or boost the existing one. The colorful Bonus Wheel is displayed after activating the free spins feature, each wedge of the wheel contains a number of treats on the house and a multiplier. The cool thing is, free rounds can be re-triggered while the win multiplier is applied to all wins including the Firepot onscreen bonus.

Last but not least, this quest for gold can suit players with different bankrolls because its betting range starts already at $0.20 a spin and goes up to $20. The game comes with a truly generous RTP of 96.86% and a maximum win of 19,000x total stake.