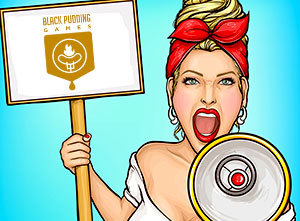 Entering the industry in 2018, the creative team of Black Pudding Games brought the combined experience of over 30 years in the casino gaming and entertainment industry. Determined to bring something that not many developers before were courageous to, the forward-thinking gang of three individuals lets curiosity be their leader.

Relying on it in all possible meanings, they’ve managed to prove that true passion is not just about being able to think differently but to do differently. So, what is it that makes their catalog so distinctive?

…and hint the following- they are proud creators of the world’s first Orbital Reactor™ Slot and a dynamic duo of Super Selector™ Scratchcards, all optimized for mobile gadgets. Among the numerous features packed in their releases, there are multipliers, extra spins, cascading mechanism and much more.

Let’s take a tour through their catalog and find out more about topics, and features in their titles.

Besides originality seen in the very name of the brand (yes, they ARE truly determined to prove that they are not one of “all sizzle and no sausage” studios), the “outside the box” approach is seen in their games as well.

…a traditional three-reel game and wrap it up the visually-appealing format, they designed Aeterna, the world’s first Orbital Reactor™ game. Cascade mechanism, chain reactions for massive winnings, 1,000x the total bet are just some of the treats which manage to keep players closely interested throughout the entire twistfull story.

Has it ever occurred to your mind to find out what a surgeon’s job looks like? There’s darkly humorous Slice & Dice™ with Super Selector™ bonus feature to satisfy the curiosity. Taking ‘Match 3’ online scratchcard format as a starting point, the gameplay is all about making the right incisions which will bring some bloody great rewards.

On the other hand…

…some punters would rather test their culinary skills, and Bun In The Oven also adorned with Super Selector™ Scratchcard, is just the one to make it possible. The fewer picks one needs to reveal a matching trio of sweet treats, the bigger the winnings- it’s as simple as that.

In the upcoming period, the studio plants to introduce more slots, instant wins and table games. Relying on what we have seen from them so far, the future content will also bring more innovative and rewarding releases.

What Are the Benefits of Collaboration with the 1x2 Network?

The most powerful force to push the business in the right direction in this industry is- a partnership with a widely recognized brand and BPG already sealed one with no other than 1x2 Network.

Announced in January 2020, this strategic deal gave the young studio an opportunity to develop all future games on the Network’s remote game server. Thanks to integration partnership, the inventive producer will stand shoulder to shoulder to a roster of developers whose games can be accessed via 1X2 Network’s powerful RGS including the unique 3PI (third-party interface) aggregation platform.

…1X2gaming and Iron Dog Studio, other brands connected by the 3PI include the likes of Playson, Habanero, GameArt, and Gamomat.

Following this mutually beneficial cooperation, the studio also had a successful presentation at one of the most visited events in the industry, ICE London 2020.