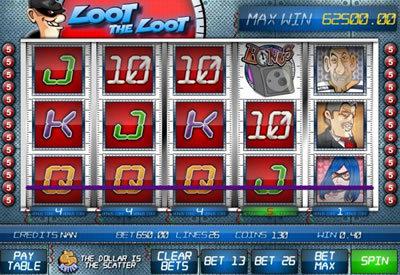 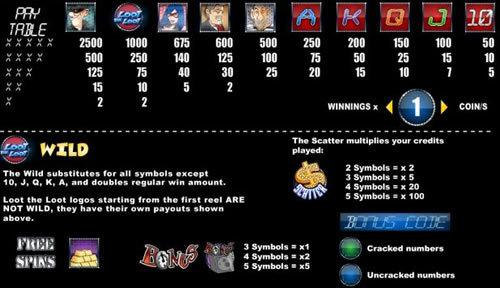 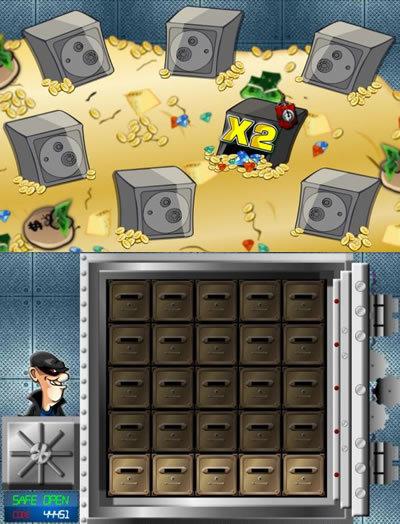 Is super easy. Coin sizes range from .10 to 5.00 credits and youll have the option to play up to five coins per line. Minimum bet with all 26 lines is 2.60 credits. Maximum bet is 650 credits per game.

Paylines in Loot the Loot slots form from left to right. Even scatters, which need no payline, will only pay when their symbols start at Reel 1 and hit adjacent reels from there.

The Loot the Loot slot pay table can be adjusted to reflect different coin amounts per line, which is a benefit if youre working a little strategy into the game. Our screenshots show the lowest possible amount to give you an idea of what one coin per line can do.

Loot the Loot slot Scatters: Two completely different scatter symbols try to creep onto the reels during the course of each game, and each symbol comes with its own bag of booty.

Loot the Loot Scatter: At least two Loot the Loot scatter symbols are needed for a win. All payouts are paid according to how many symbols are on the reels at the end of the game, regardless of payline:

Scatter Bonus Symbol: Three or more Bonus scatters from left to right will activate the Loot the Loot bonus game.

Loot the Loot slots Bonus feature launches when three or more Bonus scatters hit the reels from left to right, all adjacent, with a new screen full of safes to crack open:

Each string of games will have a five-digit code with each number shown beneath each reel. As the reels spin, they will occasionally have a number that matches the number you need.

Keep playing the game, and before you know it, youll have captured every number, just like pins in a safe. When you do, a completely different bonus game launches, with the ability to urn a ridiculous amount of coins.

A new screen will launch that places you in a safety deposit box room. Starting at the bottom of the boxes, youll click on the one you think has the most cash in it:

Play Loot the Loot slots for free or real money at Celtic Casino, where they also have several live casino games to choose from. 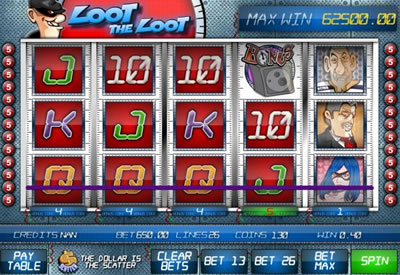