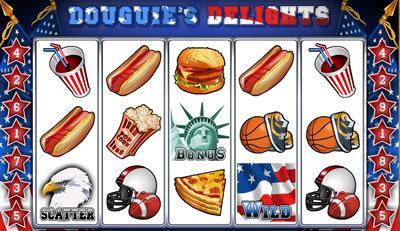 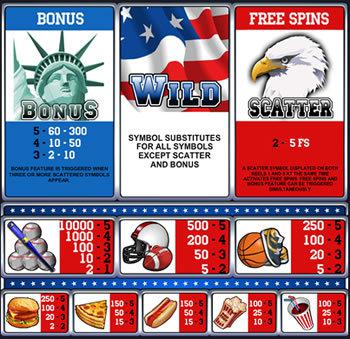 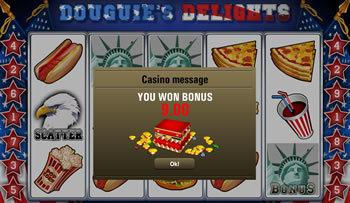 Douguies Delights slot, like most of Top Games video slots, you can expect free spins, a bonus feature, and enough wild activity to keep your game interesting as you get up to bat for the 10,000 coin jackpot!

The highest paying symbols paying with just two on a line in Douguie's Delights online slots, are the Bat and Balls, Football Gear, Basketball gear, and the Hamburger.

And of those the Bat and Balls symbol is the heavy hitter; get 5 on a payline and you will hit the homerun for the 10,000 coin jackpot!

Other symbols in Douguie's Delights slots include a stack of Pizza slices, a refreshing Beverage, a Hotdog in a bun, and a bag of Popcorn. You will need three of those delightful symbols on a line to get paid, anywhere from 10 to 150 coins.

Douguie's Delights slot symbols pay from left to right, except for the Statue of Liberty and Eagle-head Scatters, which have the liberty to make their own rules.

The Eagle-head and the Statue of Liberty symbols are the Scatter symbols.

The Eagle Scatter appears on reels 1 and 5 only.

When the two Eagle scatters appear at the same time, Free Spins are awarded.

The Liberty Bonus scatter appears on all 5 reels.

When 3 or more Liberty Bonus scatters appear anywhere on the reels, the Bonus Feature is activated. The Douguie's Delights Free Spins and Bonus Feature can be triggered simultaneously.

Douguie’s Delights online slots are a fairly quiet game on several levels.
There is no background music, only the sound of softly spinning reels.

If youre used to 25 paylines, remember that some of your favorite variations wont trigger a win on this slot game (Im probably telling this more to myself than you).

Douguie’s Delights slot game didnt tiptoe about for me, it didnt pay out regularly, but when it decided to hit, it hit wonderfully. Find out for yourself by playing Douguies Delights online slots. 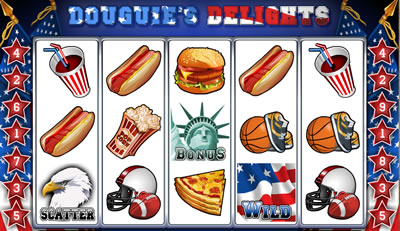