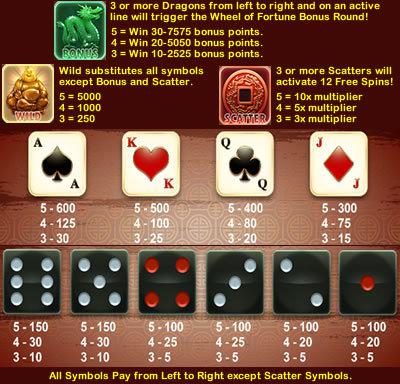 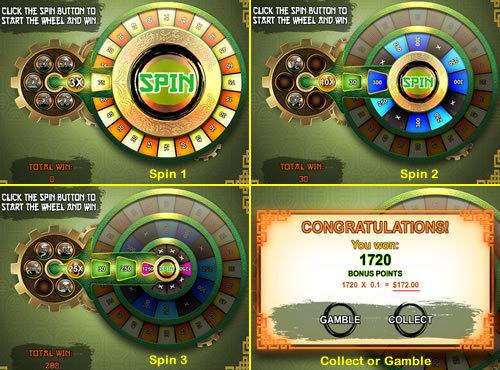 Dice and Fire slots have 5 reels and 20 paylines with a 3-stage bonus round, wilds, a free spins feature, and scatters, as animated dice, cards and other symbols roll and flow down the reels!

The Dice and Fire slot game is powered by dmx™ Games software and is played at Top Game online casinos. Its game play offers relaxing animation and can be soothing to the eyes.

The game symbols mainly consist of dice symbols, thus part of the game’s name, but the only fire in the game is on the “Gamble” button and in the Gamble feature (because there has to be fire somewhere).

The highest paying symbol in Dice and Fire slot is the Wild, which produces 5000 coins when five land on an active line (see photo above).

The game also has an AutoPlay feature where you can play up to 1000 spins, hands free.

The golden Buddha “Wild” symbol is the Wild in the game (obviously), and its main purpose is to substitute all other symbols, excluding bonus and scatter symbols. You get 5000 coins when five wilds land on a payline.

There are two scatters in the game, the Green Dragon “Bonus” symbol scatter, and the Red Coin “Scatter” symbol:

While playing Dice and Fire, I got five bonus scatters on the screen and nothing happened. That was because they were not on an active pay line.

So, be sure not to get upset when several bonus symbols appear and nothing happens. The bonus game will trigger when the scatters land properly.

Dice and Fire slots Wheel of Fortune Bonus Round.

This bonus feature is triggered by three or more Green Dragon “Bonus” symbols, starting from left-most reel to adjacent reels and on an active line.

There are three stages in the bonus round. A wheel will appear with numbers around it, and to the left of it are six symbols, on what looks like a gear.

The bonus round ends when the wheel lands on an “X” in stages 2 or 3. When the bonus ends; points awarded during the previous bonus round are tallied and then added to the game’s balance.

The game’s free spins feature is triggered by three or more Red Coin “Scatter” symbols anywhere on the reels:

Multipliers are used on wins after the Dice and Fire slots Free Spins feature has ended. 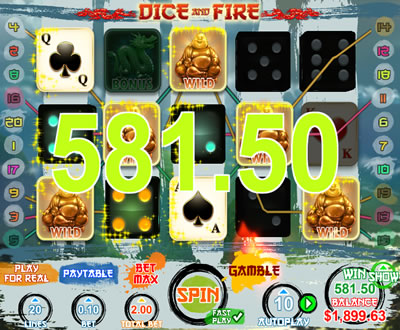