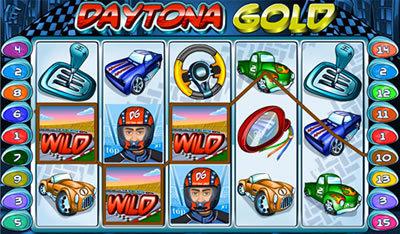 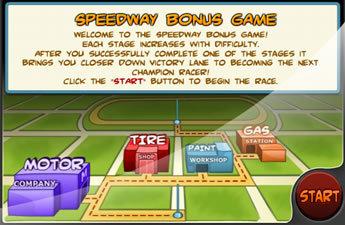 Drivers, start your engines! This is what I think of while playing Daytona Gold slots, with 5-reels, 15-paylines, speedway bonus games, wilds that pack a 12000 coin jackpot, and turbo free spins full of excitement as cars race around its reels!

Daytona Gold slot can be a high-octane video game, so strap yourself in and be ready for the ride of your life.

You will see four hot race cars racing around in Daytona Gold slots, with the favored colors of blue, orange, red, and green as they muscle their way around the reels. These cars will give payouts when only two squeal rubber on a payline.

The coins they leave behind will range from 20 to 50 with three on a line, and from 300 to 3000 when five of the same super car land on one line for a grand finish!

There are several option symbols each of the Daytona Gold race cars have within their bodies. Like their special orange Key complete with alarm buttons, Steering Wheel, Shifter, and the fancy Mirror.

Can keep the cars racing around its reels with the correct choice of ranged coin sizes; start out slow with $0.01 per line, or rev-up the engines with $5.00 per line bet.

With these choices a player can wager the minimum of $0.15 while playing all fifteen lines, or choose to put the pedal to the metal with $75.00 per game.

All Daytona Gold video slot symbols will make their move from the left to the right on its reels, as well as their payouts, except for flag lady Scatter which only appears on the end reels.

(I figured she would be on the first two reels since that's where the racing begins).

When you see the lovely flag Lady land anywhere on both reels 1 and 5 at the end of any game, the Daytona Gold Free Turbo Spin feature will be activated:

The Daytona Gold Speedway Bonus game is triggered when Race Driver scatter symbols land on a payline across reels 2, 3, and 4. A new screen will appear with instructions to the speedway bonus game.

The object of the speedway bonus game is to make it through all the following stages and become the next champion racer on victory lane:

See if you've got what it takes to drive down victory lane as the next champion racer in the Daytona Gold slots speedway bonus game! 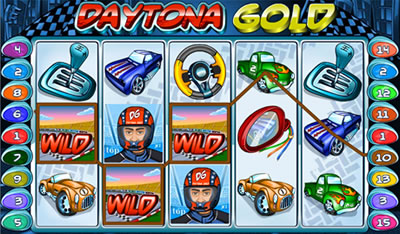