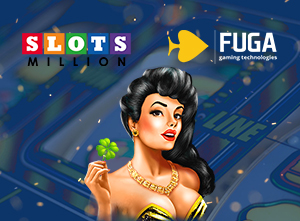 Some online casino sites are known for making deals with as many high-quality software providers as they can, and that helps them to give players a huge quantity of games while preserving the quality of what they have to offer. That is the case with SlotsMillion Casino, and they have recently inked a deal with FUGA Gaming to see their titles included in the thousands of games available at this casino site.

Details on This Deal

This content distribution deal puts players in a position to get even more games available when they play with the one online casino in the industry generally considered to have more high-quality titles than the rest. Games added to their line-up as a result of this deal include Mr. Illusio, Just a Game, Witchcraft, Ocean's Secret, Kiss of Luck, Polar Picnic and plenty of others. There are a number of games being added, but they are all also of a pretty strong level of quality, and that means that you don't have to sacrifice quality for quantity when you play here.

The Nature of the Industry

With the way that the software side of the industry is set up right now, deals like this are fairly common, but they're still a big deal for SlotsMillion in particular because they are the one site that has taken advantage of how software is set up now more than anyone. The basic idea is that almost everyone builds their games in HTML5 now, and operators are prone to having several software companies provide content for their players. Far gone are the days of exclusive content deals being the norm. Instead, the new norm of the modern era is for there to be at least a few companies that have added games to a site's listing.

The thousands of games available at this site are its main selling point, but it's not the only thing that they have going for themselves. You can take your play with you on the go with the largest selection of mobile titles that you'll find in one place, but on top of that, they are very reliable with quick cash out times and an excellent reputation for taking care of the people who play there.