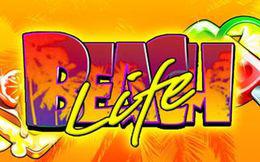 Playtech has been around for 16 years, and in that time, they have only paid out one win that was worth more than their most recent progressive jackpot. A lucky player from the United Kingdom was able to nail a £3.7 million payday on the Beach Life progressive slot recently. This player goes by the name Hilton, and Hilton has set a definite record with Playtech with this impressive payout.

The History of Beach Life

Beach Life has a long history of big wins for Playtech players. What's interesting about this game is that the jackpot only starts out at the $50,000 level, but it's paid out in the seven-figure range on a regular basis. In fact, it's known as Playtech's largest-paying progressive slot for this reason. It has a reputation for making millionaires, and that's exactly what it's done for Hilton considering the only larger win on this game was worth £4.4 million back in early 2012 just over three years ago.

In 2015, progressive slots remain some of the most popular games available in online casinos anywhere. What's so impressive about this trend is that it's lasted for more than a decade in online casinos and for a long time before that in land-based venues. Players love the idea of having a shot at picking up a life-changing sum of money in a single spin, and it's hard to blame them. It definitely paid off for Hilton, and it'll pay off for several more players who pick up play on the Beach Life slot and Playtech's other progressives.

Playtech has a long history in the online casino world, and they've been offering popular titles for more than a decade and a half. Their selection of progressive slots is one of the most impressive of any individual software provider, and this collection includes the Marvel Jackpots line of games. The Marvel Jackpots line is a collection of around a dozen games that are all linked together to the same set of four progressive jackpots, and they're all based around themes and characters from Marvel Comics. With the top jackpot starting off at $100,000 and the other three jackpots paying off regularly, it's easy to see how you could become a big winner at Playtech's games.