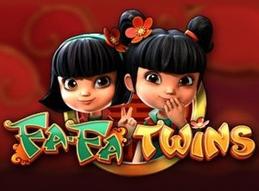 FaFa Twins is a 243 ways to win video slot with Japanese stylings, created by Betsoft, and available at BitStarz and many other casinos. On Black Friday, a lucky player there coaxed a multiplier of more than 2,000x her bet to set off the fireworks. Although no screenshots or video of the winning spin has been released we can reasonably assume that she activated the "Dual Reels" feature which first generates two identical reels and can spread to 3, 4, and even all 5. The maximum possible win on the game is 810,000 coins.

For those who may not be familiar with "ways to win" slots, traditional pay lines are eliminated in favor of a more exciting rule that allows any symbols on adjacent symbols to match, regardless of their visible positions on the reels. Counting from left to right on a 5 reel game with 3 visible positions each this creates 243 virtual paying lines with matches of three or more left to right.

According to a statement from the casino today, the player also did quite well on Wolf Gold, a video slot provided by Pragmatic Play that awarded another lucky player over $93,000 in October. The current player reportedly also had wins of 10,000, 12,000, and 14,000 on that machine making it Gold Friday for her.

BitStarz is one of the leading multi-currency bitcoin casinos on the market, providing over 800 games to choose from. Wolf Gold is one of the most popular games there according to earlier statements by the company.

Who Can Play at BitStarz?

Visitors are welcome to use the alternative blockchain currency to play there, but it is not required. Winners state that bitcoin winnings are almost always paid out within 10 minutes. Unfortunately for US players, the software supplier does not service the region so BitStarz is unable to accept bets from the U.S. Players in some other countries may find less than 800 games as NYX and NetEnt do not service certain open, unregulated markets such as Canada. Readers can go directly to the casino by clicking the following link.