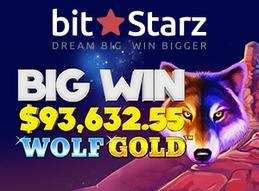 BitStarz Casino announced on Monday that a lucky player there had won more than $93,000 while playing Wolf Gold, a slot developed and distributed by Pragmatic Play.

The game has reportedly been one of the most popular of the online casino's more than 850 gaming options. According to BitStarz Wolf Gold is the most played game in the casino.

The lucky player deposited $78 on Friday. The casino was the first online gaming site to offer both bitcoin and regular fiat currency deposits, and cash outs after opening in 2014. Their motto is "Dream Big, Win Bigger".

Players from all over the world are welcome to play at the casino. However, many countries, including Canada, and the UK will only see a portion of the total games the casino offers due to software supplier restrictions and legal considerations. For instance, NetEnt pulled out of the open market in Canada at about the same time they signed on to supply the lottery corporations there with online content.

The player's $78 deposit turned into a winning streak that saw a $93,632 jackpot on Wolf Gold, the highest the game has ever paid, and 1,200x the player's deposit.

How Did He Win?

The video slot offers a surreal game world of purple crayon canyons highlighted in moonlight gold. Buffalos, eagles, pumas, and wild horses are the top paying symbols and the wolf is wild.  Three scatters trigger free games and during the bonus game all three middle reels form a single giant symbol and spin together. In addition to scatters and free spins, the game features stacked wilds in the base game. During the free spins game, a special moon symbol with numbers over it is called the Money symbol and it can hold random values or jackpot values.

Landing 6 moons will trigger the 'Money Respin' feature. In this game, the regular symbols all fade away until you are left with money symbols and blank spaces. Three spins are awarded and every time a money symbol lands it stays in place for the next spin. When new symbols hit, the spin meter is reset to 3 spins. When the bonus game is complete you are awarded all of the money value on the screen. If all 15 positions are filled the Mega Jackpot is awarded.

Something About Wolf Gold

Srdjan Kapor is the Marketing Manager at BitStarz. He had this to say: "There’s just something about Wolf Gold that our players love, and I can’t really seem to figure out exactly what it is. With that being said, I knew it was gonna pay out big eventually, and I guess today it did! Big congratulations to this roaring payout!".

In addition to legendary customer service, another thing Friday's player probably appreciates about the BitStarz is that they pay out in 10 minutes on average.