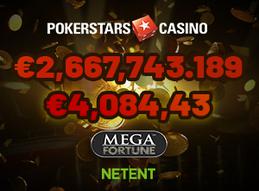 One of the things that Net Entertainment is known for is their great selection of progressive slots. The games that use the Mega Fortune set of jackpots are a great example of this. Recently, this company made history by paying out the same jackpot twice in one day to give a pair of lucky players life-changing sums of money, and they both came from the Mega Fortune Dreams game.

One of the two jackpots was won by a player from the United Kingdom. It came from a €1 spin, and it happened at PokerStars Casino. This led to a jackpot worth €2,667,743.19, which is obviously enough to completely change someone's life. However, that's not the only win on Mega Fortune Dreams that happened on March 7, 2018.

Another player at a different casino was able to take down a prize worth €4,084,430. That's also an enormous sum, and it just goes to show that this game can turn players into millionaires in an instant, even if it hasn't went a while without setting off the top jackpot.

About the Mega Fortune Jackpot

Online casinos that use the NetEnt software get an option between two games: the original Mega Fortune slot or the newer Mega Fortune Dreams game. Both of them are tied into the same set of progressive jackpots with the same opportunities to win, but they have somewhat different themes and gameplay outside of that. While they're both very high-volatility titles that center around trying to win a huge payout via the top jackpot, the Dreams version is definitely more visually appealing simply because of its age.

We've seen Net Entertainment make a lot of interesting announcements in 2018, and they finished up 2017 with a lot of momentum that has obviously carried over into this year. Several big payouts have come from this company in the past few months, and the March 7, 2018 double winners are just the latest examples of that. We'll be sure to see more new millionaires made by this company as the months go on as well, and that will come along with lots of new game releases.