Lucky Player Hits $1.2 Million Jackpot with Who Wants to Be a Millionaire Megapays 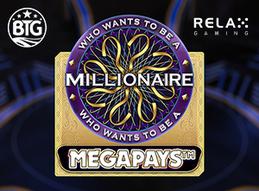 Who Wants to Be a Millionaire Megapays has fulfilled the expectation of its name by turning one lucky player into a millionaire. This high volatility online slot was integrated into the Relax Gaming (RG) platform and was able to accumulate a jackpot of $1.2 million. The player placed a bet of only $0.7 at Betfair Casino to generate this jackpot. The operator provides a range of games via the Powered by Relax platform and for the first time since September 2020, Who Wants to Be a Millionaire Megapays has generated a million-dollar jackpot!

The victory happened thanks to the Megapays mechanism, which is an exclusive mechanic available for RG and its partners. Megapays is an innovative solution that enables players to receive more frequent jackpots. The Megapays mechanic offers 4 types of jackpots: Mega, Major, Midi, and Mini. These jackpots are increasing over time with each bet!

This game was appreciated by many players over the last year, and now the life of one of the punters is changed forever!

Nick Robinson, BTG CEO said: "It was only a matter of time before Who Wants to Be a Millionaire Megapays created a real millionaire and it was a nice touch that it came bang on the anniversary of the game’s release.”

Simon Hammon, Chief Product Officer at Relax Gaming, said: “It’s always a pleasure to drive differentiation by collaborating on industry-defining games and mechanics. It’s wonderful to hear about people who then benefit massively from the titles we bring to market. “

True innovators are rare in all walks of life and Big Time Gaming is a company that revolutionized the industry and a brand that takes a different approach to online slots. This brand was established in 1996 and has been focused on innovation in slots since then. This company has been releasing many video slots every year for over 20 years. It produces many slots with different themes and always has great features so that everyone can find something for themselves in its pool of games. The company offers over 45 slot machines for online casinos. But that's not all; it also offers famous table games such as blackjack and roulette. It is the innovator of the famous Megaways mechanism, which is used by many slot machine developers.

Source: “BTG’s Who Wants to be a Millionaire Megapays Pays Out Over €1M on Relax Gaming Platform”. European Gaming. October 27, 2021.