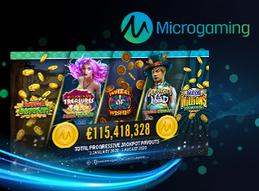 Microgaming's progressive jackpot network is one of the most rewarding ones in the industry, which a recent announcement by the provider confirms. The brand has revealed details of the latest millionaire who has scored seven figures win, as total payouts from all highest wins for the year to date surpass €30 million (from January 1st to August 1st).

... each win on the network is paid to the player in one lump sum by the operator following standard verification checks. For aggregating total network payouts, each win is communicated in EUR, using a standard currency conversion rate applied on the day of the win or payout where necessary.

... one lucky player scored a win of a lifetime on Microgaming’s Major Millions progressive slot at Spin Casino. With a win of €1,650,382.89, he has become the seventh millionaire to be made on the network so far, equating to one millionaire a month on average!

A UK-based player expressed his desire to remain anonymous, after pocketing the €1.6 million win from a €3 wager within a month of registering at Spin Casino. As with all payouts on the provider's progressive jackpot network, the winner will receive the prize as a lump sum and not in annuities.

“We are absolutely thrilled for our winner, who has become a millionaire overnight. Microgaming’s Major Millions has always been a popular game and we are delighted that the new five-reel version is proving similarly so with our customers.”

... since other notable payouts in this year include 4 multi-million euro jackpot wins on Microgaming’s iconic Mega Moolah. It includes the largest win of 2020 so far, plus a trio of wins in May across Atlantean Treasures™: Mega Moolah and Absolootly Mad™: Mega Moolah.

The supplier's progressive jackpot network grew even stronger in 2020 with the release of new progressive titles and a wealth of life-changing wins, including 550+ players pocketing €10,000 or more. But it's only a beginning since the brand has more releases of this type planned to launch this year.

Upcoming slots with progressive jackpots developed by its independent studio partners include:

John Coleman, CEO at Microgaming, announced the great success of the brand's jackpot network in the year 2020:

“With total lifetime payouts exceeding €1.2 billion, Microgaming’s progressive jackpot network has had an outstanding year to date, driven by a number of new game releases, including Wheel of Wishes, Atlantean Treasures and Absolootly Mad.

We look forward to building on this momentum over the coming months, hosting more feature-rich games that feed into our leading jackpots, which have paid out over €115 million across 2,571,389 jackpots so far this year - that's more than eight payouts every minute on average,” explained Coleman.