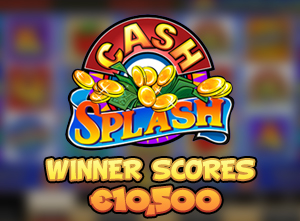 Taking down nice jackpots is always something that players can get behind, and a recent win at the flagship site of the Genesis Gaming brand, Genesis Casino, was the place to be with this jackpot. A prize worth €10,533.41 was had on the five-reel version of Cash Splash, a slot powered by Microgaming.

Features and How This Win Happened

On Cash Splash, everything is about giving players chances to win some pretty solid prizes thanks to an array of features, and it all centers around a moderately sized progressive jackpot. This payout came from the progressive, which hits pretty often and is a beacon for players who like better chances to take down a sizable amount of money compared to the larger jackpots on their network.

There are wilds, multipliers, scatter wins and other goodies to give you other ways to win along with this progressive, so it's action all-around when you're enjoying this title.

The Sequel in a Series

Something a lot of players will be aware of is that the five-reel version of Cash Splash isn't the original game in the series. Instead, there was a three-reel classic Cash Splash slot that came before by Microgaming, and it set the tone for the series by packing as much action as possible into the limited format. It's an older game, but it still has a bit of a following because of how different features were woven into the 3x3 layout that the game is based on.

Genesis Casino is the flagship site powered by Genesis Gaming, and they have an outstanding reputation for giving players some of the best experiences possible. One of the reasons for that is that they have games from several of the top providers in the entire industry, and that's the sort of thing that means players get tons of ways to get paid every single time they sit down to play.

This large selection of games that comes from different top software providers includes plenty of progressives like the one that was responsible for this five-figure win. Players there know that they are only one spin away from a life-changing sum of money when they play those titles, and that's a big part of their popularity.