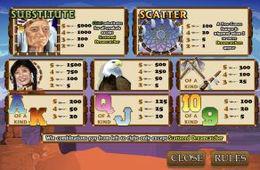 When you hear about a player nailing a seven-figure jackpot in the online slot world, you usually think that this has to be due to a progressive jackpot win. However, a player who goes by the name of Amber was the exception to this on one of the most incredible free spins streak that we have ever seen or heard of. On the Native Treasure online slot, Amber was able to take down $1.3 million in winnings.

Amber triggered the feature at 100 free spins, and she kept re-triggering the spins until she had been given a total of 1,600 free spins in total. This took her more than four hours to play through, and what's so crazy about it is that she triggered the original free spins not long after she first started playing the game.

Native Treasure is a 30-payline video slot that was originally designed by CryptoLogic. It has a wide range of available stakes, and the stakes that Amber were playing have not been made public. However, the top jackpot is a 5,000x win for five of the wild symbol, and it has an innovative free spins bonus feature that has the ability to pay out tons of free spins if you hit the re-trigger a couple of times.

InterCasino has been around since 1996, and they were one of the very first online casinos. They use games from several developers, and this gives them an overwhelming selection of titles for players to choose from. Even though Native Treasure is an older game, it was still good for a life-changing sum of money for Amber. Along these lines, it doesn't matter if you like new titles or old classics, you'll have plenty of chances to be a major winner at InterCasino.