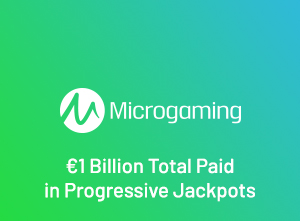 It's no secret that Microgaming has the most popular network of progressive online slots in the world. Their flagship progressive Mega Moolah currently holds the world record for the largest win online (which it achieved by breaking its own record, again), and they have plenty of titles that pay out a minimum of €1 million for the top jackpot prize.

However, their network as a whole has achieved a big milestone by having paid out over €1 billion in total winnings.

How We Got to This Point

One of the reasons that Microgaming completely dominates this space is that they have their Mega Moolah pooled progressive jackpots, which include four different jackpots that are shared among different games. Each of these games pay into the same set of jackpot prizes until they are won, and this includes the original Mega Moolah as one of the most popular slot titles they have running today.

On top of that, there are a variety of other progressives in every genre. This includes plenty of slots with smaller jackpots on top of progressives for blackjack, video poker and casino table games. In short, they have larger progressive jackpots than anyone else, and they have progressives available in more types of games than anyone else. This is clearly a winning formula for dominating the space considering they were also the first software provider for the very first online casino back in the mid-1990s.

What to Expect From Here

This is pure speculation, but we wouldn't be surprised if they leveraged breaking this milestone by coming out with a new progressive title sometime later this year. They haven't announced anything, but it seems like the kind of thing they would do.

Outside of that, we already know that they are going to be pretty aggressive with their release schedule this year, and we suspect that we could see lots of new Microgaming slots that push the envelope on the industry as a whole. Whether or not this includes a new progressive title is yet to be seen, but they will definitely be pushing hard to maintain their position at the top of the mountain for software providers in the industry.